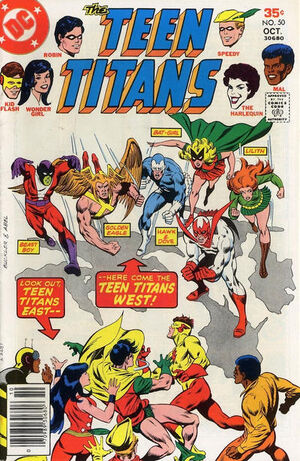 Appearing in "The Coast-to-Coast Calamities!"Edit

Synopsis for "The Coast-to-Coast Calamities!"Edit

Robin, Kid Flash, Wonder Girl, and Harlequin encounter a new super-villain, Captain Calamity, and his gang when they rob passengers on the Long Island Railroad. Meanwhile, on the West Coast, Lilith recruits other teen heroes, including Bat-Girl, Beast Boy, Golden Eagle, and the Hawk and the Dove to combat a series of mysterious disasters. Then Robin, Harlequin, Speedy, Guardian, and Bumblebee are stymied in a second battle with Captain Calamity.

Retrieved from "https://heykidscomics.fandom.com/wiki/Teen_Titans_Vol_1_50?oldid=1463082"
Community content is available under CC-BY-SA unless otherwise noted.