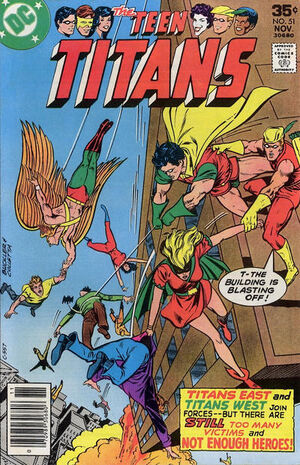 Appearing in "Titans East! Titans West! And Never (?) the Teens Shall Meet!"Edit

Synopsis for "Titans East! Titans West! And Never (?) the Teens Shall Meet!"Edit

Lilith and her "Titans West" group, including Gnarrk, rescue victims of more incredible disasters, and discover a connection between these events and the crimes of Captain Calamity on the East Coast. Robin and the Titans' "first team" defeat Captain Calamity's henchmen, and Kid Flash and Wonder Girl rejoin their teammates just in time to hear Aqualad announce his resignation: he has diagnosed his "fainting spells" as a psychosomatic illness brought on by his feelings of inferiority and uselessness to the land-based Titans team.

Retrieved from "https://heykidscomics.fandom.com/wiki/Teen_Titans_Vol_1_51?oldid=1463084"
Community content is available under CC-BY-SA unless otherwise noted.