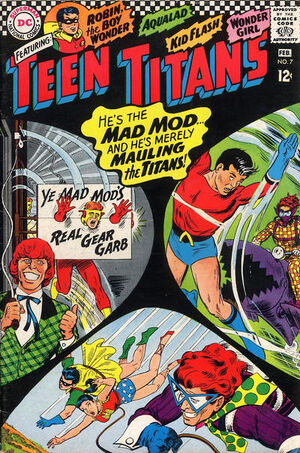 Super, Duckies! Now 'ere's some gear and ginchy little models that will please the "birds"...

Appearing in "The Mad, Mod Merchant of Menace"Edit

Synopsis for "The Mad, Mod Merchant of Menace"Edit

Wonder Girl has fallen for the new British rock 'n' roll sensation Holly Hip and has put an autographed photo of him on the Titans bulletin board, leading mockery from the male members of the group. They are then contacted by US Treasury Department. There they are asked to join Holly Hip as part of a tour through Europe in order to promote both continents cultural exchange program. This delights Wonder Girl very much, however the government official advises them that the real reason they're being sent is because there has been an upsurge in smuggling of materials and that the Titans are to try to find evidence of the operations and close them down, and identifies that all the vague clues they have gained point toward Holly Hip.

When the Teen Titans arrive in London their fanfare is overshadowed when Holly Hip himself arrives on scene. While loading up his gear into the plane for their tour, Hip tells the group that his clothing are specially made by a London fashion designed known as the Mad Mod. While Holly Hip manages to charm Wonder Girl, the rest of the Titans are suspicious of the musician, not willing to rule out the possibility that he is a member of a smuggling operation.

Investigating the situation, Robin, Wonder Girl, and Aqualad are invited into the Mad Mod's shop and they can find no wrong doing going at that location. However, suspicious of Kid Flash's disappearance, the rest of the Titans try to stop the Mad Mod from leaving in a delivery truck, but all but Aqualad fail. Driven to the Thames River, the Mod and his henchmen try to dispose of Kid Flash's body (disguised as a mannequin) into the river. Aqualad saves his teammate in spite of Mad Mod's attempt to kill them, but the Mod manages to escape and close his shop.

Later telling Holly Hip of the situation, he agrees to let the Titans hide out in one of his clothing trunks to see if it is picked up by the Mad Mod and his men and load both Robin and Wonder Girl inside. Sure enough, while en route to France, the Mod is aboard the plane and is trying to leech the materials out of the clothing. Robin and Wonder Girl try to get photographic evidence, however turbulence causes them to fall out of the suit case and into a fight with the Mod. The Mad Mod manages to escape out of the air plane parachuting to safety.

When Robin hears Holly Hip say that he needs to send his clothing back for alternations, Robin suspects that it has more smuggled goods in it and convinces Hip not to send them back hoping that the Mad Mod would come for the outfits directly. Sure enough, during the show the Mad Mod and his goons attack and are met by the Teen Titans. With an assist by Holly Hip (who smashes his guitar on the Mad Mod's head) the Mod's gang is broken up and taken into police custody and Hip is cleared of any charges. Without any of his trademark clothing, Robin offers up his costume and Wonder Girl her lasso as a make-shift guitar so that the Holly Hip can perform his show.

Retrieved from "https://heykidscomics.fandom.com/wiki/Teen_Titans_Vol_1_7?oldid=1482447"
Community content is available under CC-BY-SA unless otherwise noted.