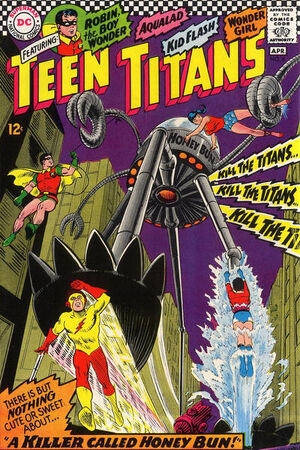 At the Titan Lair, Robin, Kid Flash, Aqualad and Wonder Girl are having another meeting and spend their time going over fan mail. Robin reads a distressing letter about foreign exchange students being the subject of protests by the people of Lansford. Arriving in the town, they find a group of people protesting the arrival of the foreign exchange students and meet with Dr. Paxton who introduces them to the students in question: Ahmed Al Din from Africa, Sama Rau of India and Hans Vernick from Europe. Soon it is learned that a new experimental robot dubbed "Honey Bun" has been stolen. The factory worker fingers Hans as a likely suspect as he was seen on the site. This leads to a riot between the students and the vigilante protesters which the Teen Titans break up. They then agree to take the case and clear Hans name if he is innocent of the accusations.

Going back to Paxton's office they learn that Honey Bun was a jungle warfare device that was being constructed by the Lansford Research Corporation. Just then word that the mayor has asked for Hans Vernick's arrest reach Paxton and the Teen Titans, the Titans agree to go out and track Hans down. They happen upon the boy with Honey Bun, controlling the device with it's remote control. The Teen Titans try to stop the robot and manage to take away the controls from the boy. The Titans then try to nab him, but due to the intervention of Dr. Michael Learner (who tries to shoot the boy) the exchange student manages to escape.

The Titans then resume their chase and learn that Hans had been captured by the vigilante group, who intend to tar and feather him. The Titans arrive in the neck of time and prevent this from happening, and give the vigilantes a taste of their own medicine. With Hans in their custody, the Titans learned that the boy did indeed steal Honey Bun, but only to prevent it from being stolen from a spy from his own country, a man named Karl Lamer: The same man who identified himself as Michael Larner.

When the Titans radio into the police station to learn if "Larner" returned Honey Bun to the factory, they are told that he had not and realize that Hans is telling the truth. Flying back into the city, the Titans are shocked when Lamer (Who hid Honey Bun in a home coming float) bursts free and begins terrorizing the city.

During the fight it appears the Teen Titans are unmatched against the robot, that is until Robin manages to incapacitate the device by shooting sand into it's joints causing it to fall over. With the robot defeated Lamer is easily captured and turned over to the police. Later when the Titans leave Lansford, there are people with signs of praise to the Titans instead of protests against foreigners.

Retrieved from "https://heykidscomics.fandom.com/wiki/Teen_Titans_Vol_1_8?oldid=1482448"
Community content is available under CC-BY-SA unless otherwise noted.