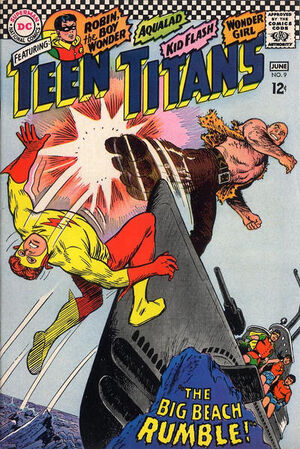 Appearing in "The Big Beach Rumble"Edit

Synopsis for "The Big Beach Rumble"Edit

Collecting their regular mail delivery, the Teen Titans find a request from the town of Baxter Beach who asks for the Titans aid in keeping the peace during the college spring jamboree which has developed a reputation to be a wild party that has caused lots of property damage in the past. The towns people have asked for the Titans aid this year because violence is likely to spread between Brandon College and it's rival Dobbs University. To complicate matters, students from each college have sent the Titans each pairs of sweaters for each institution. To show that they are not picking sides and treading both as equals, the Titans instead opt to wear college sweaters with "TT" representing the name of their team.

They arrive at Baxter Beach just as gangs from both schools arrive and are about to rumble on the beach. Confronted by the mayor and the Teen Titans, the students of Brandon College and Dobbs University are at first unwilling to put their differences aside, however when some of their numbers try to attack the Titans directly and fail miserably and the Titans suggest they devote their energies to something more constructive, like saving the beach from being fully eroded by the ocean, the two schools put their differences aside and work together to save the beach from being washed away.

With their differences aside the combination of the two schools, city officials, and the Titans the beach is saved. The festivities come to an end when a pirate by the name of Captain Tiger enters the waters of Baxter Beach with the intent of looting the towns bank. However, his submarine runs afoul of the new extended beach and is beached unexpectedly. This alerts the attention of the Teen Titans who go to investigate all the commotion.

The Titans battle Captain Tiger, and while they are able to repel the weapons fired from his ship, they are easily out matched in hand to hand combat, even Kid Flash -- with all his superior speed -- is easily beaten by Captain Tiger and they are all tied to the ship. The teens from the two schools then work together, using the locomotive they used to save the beach to ram Captain Tiger's ship and attack his goons head on. The teens manage to free the Teen Titans who then turn the tables on Captain Tiger and his men, delivering them a sound defeat and turning them over to the authorities.

When the Titans leave they are thanked by the people of Baxter Beach, and the students of Brandon College and Dobbs University for showing them how to get past their differences and be able to enjoy the beach together in peace.

Retrieved from "https://heykidscomics.fandom.com/wiki/Teen_Titans_Vol_1_9?oldid=1482463"
Community content is available under CC-BY-SA unless otherwise noted.