Start a Wiki
Part of the 'Titan's Children' event 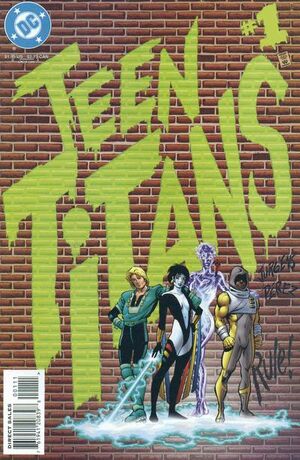 We have failed. We hoped to protect these innocents -- yet we never even had the chance to enter the fight!

Appearing in "Titan's Children (Part I of III)"Edit

Synopsis for "Titan's Children (Part I of III)"Edit

A sixteen-year-old girl named Audrey Spears is trapped in a virtual reality simulation on the moon of Titan. Her life as she knows it is an idyllic fairy tale setting patterned in the style of 1950s Earth sitcoms. She speaks of a boy named Cody Driscoll who wants to take her to the prom. Her "brothers" in this simulation make fun of her, although she has the loving support of her faux parents. From outside the VR chamber, two alien Psions named Jarn and Dorek monitor her progress. They are curious by her referenced to Cody, an actual teenage boy, and one of particular interest to the Psions.

On Earth, the real Cody Driscoll breaks into NORAD at Cheyenne Mountain on a dare. He sneaks into a monitoring station and watches their observation screens. Suddenly, he sees a flickering image of a girl named Toni Monetti momentarily flash before his eyes. Alarms begin to sound and Cody thinks that the guards have been alerted to his presence. In truth, the klaxons are in response to a UFO sighting. Startled, Cody accidentally exposes himself and begins running from the security team. He races inside a woman's locker room, but these women are heavily trained guards who easily beat him down.

In Metropolis, a man named Loren Jupiter consults with a mysterious cloaked figure known as Omen inside his Solar Tower skyscraper. Omen is uneasy and senses that the "targets" will soon be coming into their powers. Mister Jupiter assures Omen that he will do everything in his power to help them. Omen suddenly experiences a psychic surge and knows that a ship is approaching the Earth.

In Ivy Town, Connecticut, Mister and Mrs. Crockett drop off their sixteen-year-old son, Isaiah, at the steps of Ivy University. Isaiah has just received a full scholarship and is nervous about starting college at such a young age. His nervousness has physical consequences as his hands begin to suddenly glow red hot. Fortunately the super-hero known as the Atom (now regressed in age to a teenager) is present on the scene and tries to help him.

In New Jersey, Toni Monetti is having a pool party at her family's spacious estate. Toni's friend, Gayle, comments about how pale she is, and Toni confesses that no matter how much she is out in the sun, she can never get a tan. Toni is startled when she sees an image of Isaiah Crockett and Cody Driscoll in Gayle's sunglasses.

Back at the Solar Tower, Omen continues to perceive psychic impressions. Omen tells Jupiter that the aliens known as the H'San Natall have enslaved Psions to do their dirty work and have a deeply vested interest in Cody, Isaiah, Audrey and Toni.

Omen's fears bear fruit as the Psions teleport Cody, Isaiah and Toni onto their laboratory ship. What they don't realize is that the Atom has sneaked on board as well while hiding on Isaiah's person. The teens are rendered unconscious and placed inside the VR chamber where they become part of Audrey's fantasy world. In the simulator, they all meet one another and recount how they have each seen images of the other.

The Atom meanwhile fights against the Psions and breaks the kids out of the VR simulator. They try to find a way out of the laboratory. Toni's ability to generate blasts of silver plasma begin to develop and the other kids find themselves enhanced as well. Isaiah super-heats his hands and places them against a wall, melting it. He learns only too late however, that they are not inside a building, but a space ship. As the hull melts, Isaiah is pulled out into the vacuum of space.

Retrieved from "https://heykidscomics.fandom.com/wiki/Teen_Titans_Vol_2_1?oldid=1521526"
Community content is available under CC-BY-SA unless otherwise noted.