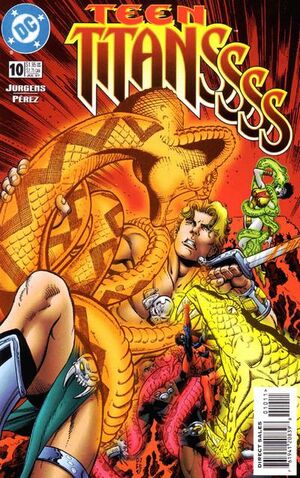 Snakes! Why'd it have to be snakes?!

A herd of Triceratops stampede through the regions where the Teen Titans were confronted by Tara Morgan's soldiers. The Titans scramble to ready themselves for the onrushing dinosaurs and in so doing, end up protecting the soldiers as well. Tara is grateful for the Titans' help and brings them back to her castle where they are provided with royal baths and new clothes.

Meanwhile, the Warlord and Prysm awaken inside Motalla's floating city. Prysm is excited by her surrounding, but the Warlord doesn't trust Motalla at all. All he wants to do is leave. Motalla learns that Prysm wants nothing more in the world than to be a normal human being. Motalla tells that she can grant her that very wish.

Back in the village, Tara's soldiers are set upon by a horde of strange energy snakes. The Titans try to help out, but the snakes are too fast or too powerful for their powers to have any effect. One snake latches onto Joto and they both disappear. The Titans follow the animals' trail through a series of labyrinthine corridors and eventually come upon the Warlord and his colleague, Shakira. They are chained to the walls of the labyrith -- the apparent prisoners of Motalla.

The Titans free Warlord and Shakira just as Motalla arrives. Motalla has kept her promise and has turned Prysm into a normal human -- for a price. Motalla now wields all of Prysm's powers.

Retrieved from "https://heykidscomics.fandom.com/wiki/Teen_Titans_Vol_2_10?oldid=1482478"
Community content is available under CC-BY-SA unless otherwise noted.