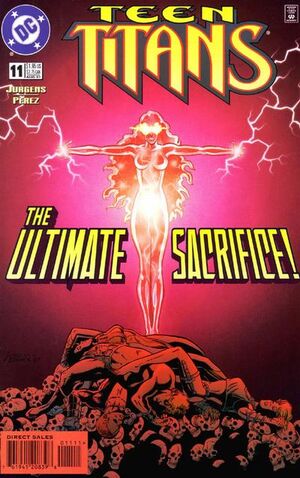 If Superman or, God, Batman sees me pulling this stunt they'll never give me a break! Plastic Man and Damage... maybe even Aztek will get into the JLA before me!

-- The Atom, riding on Shakira's back

Motalla, harnessing the power of Prysm, blasts Risk from the top of her sky city and he begins plummeting. He survives the fall into the jungles of Skartaris, but his descent unseats the sky-sled carrying the now-human Prysm. Prysm tells Risk why she gave up her power, and Risk counters by explaining that Motalla is using her power to kill the Titans.

In the Sky City, the other Titans team-up with the Warlord, Shakira, Tara and Tinder to fight against Motalla. The fight takes place within a lower dungeon and Joto notes that Motalla should be losing power as she is cut off from the sun. As such, he determines that she must be deriving power from an alternate source. Joto uses his thermal-tracking abilities and finds the power source behind a large, steel door. The Atom shrinks down and walks under the door to discover the enslaved form of sorceress Jennifer Morgan -- daughter of the Warlord. Atom frees Jennifer and the sorceress joins the fight against Motalla. Meanwhile, Risk and Prysm return to the sky city.

Jennifer Morgan learns that the only way to defeat Motalla is if Prysm agrees to take her power back. As Prysm latches on to Motalla, Jennifer casts a spell, reversing Motalla's magic, and returning Prysm's energy processing abilities back to her. Motalla instantly ages into an extremely old woman. With the Morgan family members reunited, the Titans effect some fast repairs on the T-Jet and head for home.

Meanwhile, back in Metropolis, Omen appears in the Solar Tower in a state of great duress. She warns Loren Jupiter and Neil Richards of the coming of Haze. Believing that the Titans are dead, Mister Jupiter decides that the only thing that can stop the threat of haze is the original Teen Titans.

Retrieved from "https://heykidscomics.fandom.com/wiki/Teen_Titans_Vol_2_11?oldid=1521527"
Community content is available under CC-BY-SA unless otherwise noted.