Start a Wiki
Part of the 'Genesis', and 'Titans: Then & Now' events 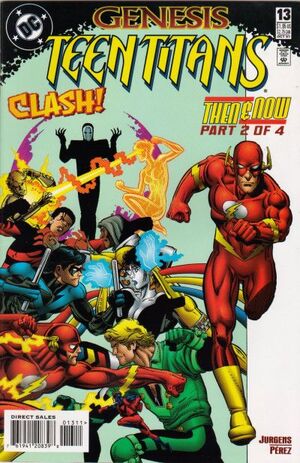 Years ago I used to hang out with a group called the Teen Titans. We were a junior Justice League dedicated to fighting crime, protecting democracy, listening to rock and roll -- and trying to score with Wonder Girl.

Appearing in "Titans: Then & Now (Part II of IV)"Edit

Synopsis for "Titans: Then & Now (Part II of IV)"Edit

Titans alumni Nightwing, Arsenal, W:C:DC:Wallace West (New Earth)Flash and Tempest stand before younger versions of themselves; versions similar to what they looked like back when they were all members of the original Teen Titans. Both groups begin fighting one another and the younger Titans taunt their older adversaries, citing the worst points of each of their respective careers. Kid Flash tells Wally that he is a disgrace to the legacy of Barry Allen. Robin tells Nightwing that he could never measure up to the Batman. Speedy reminds Arsenal of the years he spent as a drug addict, and Aqualad accuses Tempest of being secretly happy that Aquababy and Aquagirl are dead so he could enjoy the spotlight.

A few hours earlier however, the real Teen Titans met up with Neil Richards outside the Cardy Boarding School. He brought them up to speed with everything that has happened including the appearance of Haze and the disappearance of Loren Jupiter. The kids pile into the T-Jet and take off for Wyoming - the last known whereabouts of the original Titans. En route, the kids continue to bicker with one another over recent events, particularly Risk and the Atom.

When they arrive in Wyoming they find several of their known adversaries ready to do battle with them: Vault of Dark Nemesis, Jugular of the H'San Natall, a Psion and one of his robotic sentries. The Titans begin fighting the villains and Argent notices that Vault appears to be much more limber than she remembered.

Suddenly, Omen arrives and reveals the truth of the situation. Haze has used his powers to create illusions in the minds of all the Titans, forcing everyone to see their foe as someone else entirely. Once the truth is revealed, the illusions disperse and everyone apologizes for attacking one another. Like many before her, Argent finds herself smitten by Nightwing.

Without warning, a dimensional aperture opens and giant tentacles emerge, grabbing Omen and taking her away. The Titans mobilize to get her back. They explore Haze's realm and the Atom is the first to find Omen.

Retrieved from "https://heykidscomics.fandom.com/wiki/Teen_Titans_Vol_2_13?oldid=1524649"
Community content is available under CC-BY-SA unless otherwise noted.