Start a Wiki
Part of the 'Titans: Then & Now' event 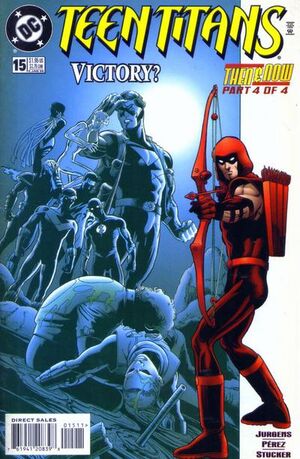 Other Characters:
The following characters appear as illusions only

The Teen Titans and the original Titans stare in awe as the face of Omen is finally revealed -- Lilith Clay!. Lilith is an empath and an ally of the original Teen Titans as well as the New Teen Titans. The assembled heroes also learn that Lilith is the daughter of Loren Jupiter and as such, is also the half-sister of Jarrod Jupiter, aka, Haze. Haze's hatred for Lilith is equal to his hatred of the other Titans, but he also recognizes her as a source of power. Through Lilith, Haze would be able to channel her psychokinetic powers in order to create illusions so elaborate that they actually become part of the fabric of reality. He is still however, hampered by the neglect that his father has visited upon him over the years and continues to avenge himself against him by tormenting Loren Jupiter's newest charges, the Teen Titans.

He teases the heroes with images of their deepest desires. Arsenal sees himself succeeding his mentor, Green Arrow while Prysm finds herself reunited with her virtual family. Others however continue to suffer the torture of their worst nightmares. The Atom feels the full impact of being rejected not only by his ex-wife Jean Loring, but also by his former colleagues in the Justice League. Tapping into Omen's memories and psyche, Haze summons forth images of every villain the Titans have ever fought and sets them upon the heroes.

While the heroes are distracted battling the illusions, Haze addresses his father, demanding to know, "Why won't you love me?!" Lilith tries to intercede on Loren's behalf, but Haze throws her from the tower of his compound. Fortunately, Arsenal fires a grappling arrow that enables her to slide down to safety. With the psychic connection between Haze and she severed, Haze is now vulnerable. Joto leaps forward and punches Haze and all of his illusions begin to disperse.

As they fight, Haze grabs a hold of one of his gas containers threatening to "go nuclear". Arsenal fires an incendiary arrow in their direction. The top of the tower explodes in a cloud of flame. Joto remains inside the inferno to insure Loren Jupiter's safety. However, even with his own thermal powers, he is not impervious to the intense heat. Jupiter is saved, but at the cost of Joto's life.

Retrieved from "https://heykidscomics.fandom.com/wiki/Teen_Titans_Vol_2_15?oldid=1507344"
Community content is available under CC-BY-SA unless otherwise noted.