Part of the 'Titans: Then & Now' event 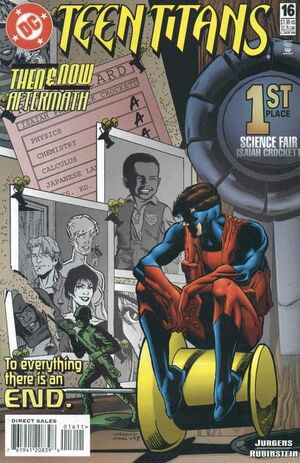 He chose a name common to his heritage because, as a young boy, he lamented the lack of African American super-heroes. He dreamed of becoming a role model. A dream that sadly will never be realized.

Appearing in "Titans: Then & Now (Epilogue)"Edit

Synopsis for "Titans: Then & Now (Epilogue)"Edit

The Titans begin going through Joto's belongings before attending his funeral. Each of them expresses their own sense of remorse at his passing, but some are taking it worse than others.

The funeral itself is attended by Isaiah's family as well as his allies in the Teen Titans and the original Teen Titans who were present when Joto gave his life fighting Haze. His father, Judge Crockett, exchanges words with Loren Jupiter who expresses his sincere lament at his family's involvement in the death of the man's son. Isaiah's sister, Nikki, approaches Cody Driscoll and offers him words of support, telling him that Isaiah actually thought that Cody was really cool.

After the service, Lilith goes to meet with the other original Titans. Nightwing, Arsenal, Flash and Tempest are still sore at her for never revealing that she is Loren Jupiter's daughter. Lilith tells them that she did not learn of this fact until well after she had disassociated herself from the Titans.

Back at the team's HQ, Loren Jupiter announces that he is disbanding the Teen Titans. He refuses to take responsibility for any more spilled blood. Argent is particularly distressed by this and feels that the Titans should remain together in honor of Isaiah. The kids discover Isaiah's journal and Argent learns that he harbored a secret crush on her.

Later, Lilith goes to visit her half-brother Jarrod inside a mental health facility. After being exposed to his own hallucinogenic gas, he has been rendered catatonic. He dreams of growing up in the perfect, idyllic family household -- one that does not include the Teen Titans.

Retrieved from "https://heykidscomics.fandom.com/wiki/Teen_Titans_Vol_2_16?oldid=1521530"
Community content is available under CC-BY-SA unless otherwise noted.