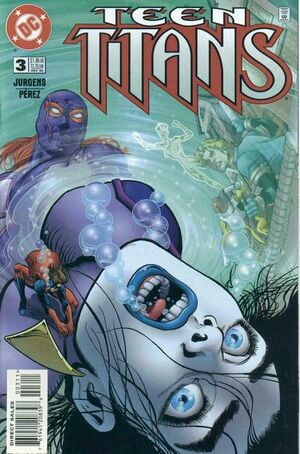 I don't belong with these guys! I was Justice League! I was big time!

An enforcer for the H'San Natall known as Jugular follows the fleeing teenagers and their Psion captive back to Earth. They open fire on their ship, damaging one of its engines, forcing it to crash-land in the swimming pool at Toni Monetti's mansion. The kids all survive the crash and are elated to be back on Earth.

Meanwhile, a witness to the crash places a call to reporter Marty Pink at the New York Daily Probe, a disreputable tabloid specializing in unorthodox noise stories. Pink decides to investigate the crash site on his own.

At the Monetti residence, Toni and her new found friends meet her parents. Anthony Monetti is less than happy about the situation and belts out a string of profanities.

Jugular lands on Earth and tracks the kids down. He impales the Psion Dorek just as he is in the midst of explaining the children's origins to them. The kids snap into action and fight back, but Jugular's malleable body makes him nearly impossible to injure. Suddenly, Omen appears and teleports the kids to a safe location. Unable to finish them off, Jugular returns to his ship. From nearby, Marty Pink takes photographs.

The kids are taken to the Solar Tower where they meet Loren Jupiter and Neil Richards. Jupiter is one of the wealthiest men in the world and has prior experience working with kids, including the original Teen Titans. Aware of their powers as well as their alien/human background, Jupiter offers to provide the kids with shelter and training. The Atom agrees to stay to help them out, and the kids adopt costumes and code names. Isaiah Crockett becomes Slager. Toni Monetti calls herself Argent. Audrey Spears is Prysm, and Cody Driscoll - the ultimate risk taker is aptly named Risk. The five of them become the new Teen Titans.