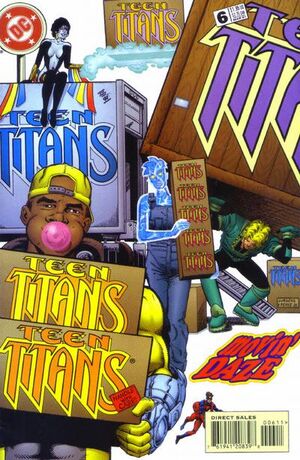 Here I am a big time, big league, big bucks kinda super-hero and you guys turn me into Movin' Man! Very uncool.

After several weeks of training the Teen Titans at the Solar Tower, Loren Jupiter relocates the Teen Titans to a new headquarters. He provides them with a state-of-the-art apartment complex (designed by Neil Richards) above the Knock Out Video rental outlet.

Although the Titans enjoy their new HQ, Toni feels that she's taking a step down from her accustomed lifestyle, so she invites the crew to her family estate for some R&R.

The Titans get to know each other better and Isaiah grows jealous of Cody's constant flirting with Toni. Isaiah likes Toni, but is too shy to ask her out. Cody also takes an interest in Prysm, but accidentally upsets her when he inquires as to why she never wears any clothes. He learns later that Prysm needs to constantly absorb solar radiation or else she will weaken.

Back at the HQ, Cody sneaks into Prysm's room in the hopes of apologizing to her, and finds a gallery of paintings depicting the 50's sitcom simulation that she grew up in on Titan.

Later, Cody is still upset over the recent failure to capture the members of the The Veil. He knows that Jupiter won't approve a mission to track them down, so he instead appeals to Omen. Omen agrees with Cody's objectives, and teleports the Teen Titans to the Veil's headquarters. They raid the facility and accidentally set off a self-destruct timer. The team succeeds in evacuating the base however before it explodes.

On their way home, the T-Jet is passing over Colorado. Cody asks the Atom if he could drop him off to visit his mother. He goes to the trailer park he grew up in and tells his mother everything that has happened to him. He also tells her the truth about her alien abduction and the forced insemination that led to Cody's birth.

Retrieved from "https://heykidscomics.fandom.com/wiki/Teen_Titans_Vol_2_6?oldid=1482473"
Community content is available under CC-BY-SA unless otherwise noted.