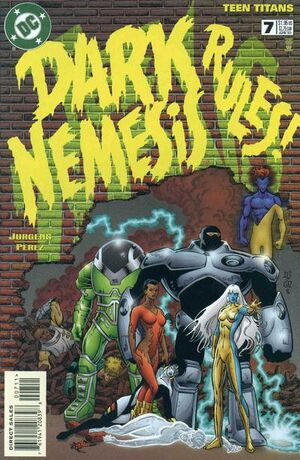 We want you to engage these Teen Titans in battle and learn what you can about them. Do you accept?

Appearing in "Dark Nemesis (Part I of II)"Edit

Synopsis for "Dark Nemesis (Part I of II)"Edit

Pylon of the The Veil hires the mercenary team, Dark Nemesis, to capture the Teen Titans. He offers them two million dollars to bring them in alive, but sweetens the deal by offering to triple the fee if they succeed in killing them.

Back in Metropolis, Loren Jupiter admonishes the Teen Titans for disobeying orders and actively pursuing the Veil. The Atom stands by his actions and is resentful at Jupiter for the way the Titans (in particular, himself) are being treated. The two argue and the Atom quits the team. Risk stands by the Atom's decision and quits as well. Prysm convinces Risk to stay, citing that the Teen Titans is the only family she has now. If the team were to break apart, she would have no where else to go. Risk likes Prysm and decides to give it another shot, for her sake.

The Atom meanwhile, changes into his civilian attire and walks down to the Ace o' Clubs in Hob's Bay. He tries to buy a drink from the proprietor, Bibbo Bibbowski, but Bibbo refuses to serve him since he doesn't look old enough to drink.

Dark Nemesis sets their trap for the Teen Titans. They attack the Mall of the Universe in Minneapolis, sealing the building off with a force field and taking hostages. They issue a public broadcast, challenging the Teen Titans to come and stop them. Even though they are bereft of a leader, the Titans take the T-Jet and respond to the call.

The Titans engage Dark Nemesis, but soon realize that they do not have the experience needed to defeat them. Risk tries to take down Vault, but Vault's armor projects a force field that repels Risk, sending him flying across the mall. Argent attacks the team leader Axis, but her lack of self-esteem makes her vulnerable to attack. Axis uses her mental power to disorient Argent, enabling her teammate Blizzard to fell her from behind. Prysm fights with the super-speedster Carom, but Carom finds a way to negate Prysm's ability to process energy. Scorcher matches her Pyrokinetic powers against Joto's Thermokinesis and proves to be his superior. As Joto is about to lose consciousness, he whispers to himself, "Ray... we need you. Where... are you?

Retrieved from "https://heykidscomics.fandom.com/wiki/Teen_Titans_Vol_2_7?oldid=1521525"
Community content is available under CC-BY-SA unless otherwise noted.