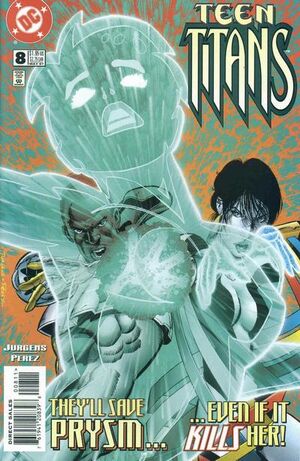 You can do it! You have to do it! Make believe your dad shredded all your credit cards!

-- Joto, inspiring Argent to break free of her cell.

Dark Nemesis has captured the Teen Titans and currently has them imprisoned inside special cubes designed to negate their powers. Each of the Titans has been outfitted with special bracelets that records vital biological information and transmits it back to Pylon.

In Metropolis, the Atom is at the Ace o' Clubs and sees a television broadcast of the Titans' plight in Minnesota. He asks Bibbo Bibbowski to dial the telephone number to the mall where the Titans are being held, and he uses his size-altering powers to traverse the distance via the phone lines.

The Atom materializes inside the hot zone and immediately takes the battle to Dark Nemesis. He punches Axis across the jaw and then gets to work on Vault.

Meanwhile, Joto uses his psychic link to the other Titans to make contact with Argent. He encourages her to super-charge her powers to break free of the containment cube. The plan works and she is now able to help her teammates break free.

The Atom enters the circuitry of Vault's armor, short-circuiting it, causing the villain to collapse. Joto fires a thermal projectile at Blizzard, shattering his helmet. Blizzard is actually a monstrous being who cannot breathe without his special helmet. Argent then has a rematch with Axis, while Risk uses a stone column to batter Carom into unconsciousness.

The only one who has been unable to break free is Prysm. Denied access to ultraviolet radiation, her powers are waning and she is on the verge of death. The Titans release her from the containment cube and Argent super-charges her with silver plasma. The charge causes a massive power surge that rocket Prysm into the sky. With Dark Nemesis out of the way, the other Titans try to track Prysm's trajectory. They know that she landed somewhere in the Arctic Circle.

In fact however, Prysm has journeyed all the way to the lost world of Skartaris.

Retrieved from "https://heykidscomics.fandom.com/wiki/Teen_Titans_Vol_2_8?oldid=1482472"
Community content is available under CC-BY-SA unless otherwise noted.