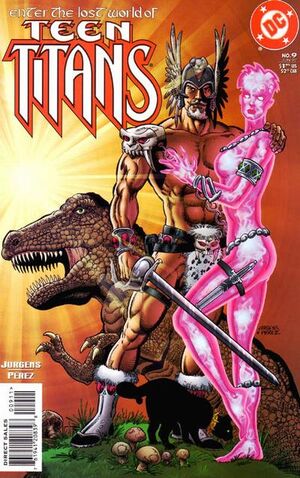 The next time you need a hero, call Tarzan or Prince Valiant! Whatever you do -- don't call me!

Prysm awakens in the mythical world of Skartaris. Immediately, she is set upon by a hungry Tyrannosaurus Rex. Fortunately for her, Travis Morgan - the Warlord appears and drives the creature off. Morgan begins to ask Prysm questions, but she has no idea where she is or how she came to be here.

Meanwhile, the Teen Titans fear that Prysm is dead. They trace her trajectory to the Arctic Circle, but lose track of her. They are forced to report the news back to Loren Jupiter. The Titans lose confidence in themselves, but Risk refuses to give up the search.

Loren Jupiter's troubles intensify when he receives a visit by congressman Terrance Dumont and his aide, Garrison James. Dumont wants to know if Jupiter is still involved in studying and training metahumans. Jupiter denies the accusation and tries to placate the congressman's concerns.

The Titans meanwhile, continue to follow Prysm's last known coordinates. Flying over the Arctic Circle, they encounter a voluminous black cloud. The cloud makes the T-Jet's instruments go haywire and the plane begins plummeting. The Atom levels it out, but the jet crashes into the jungles of Skartaris. While exploring the terrain, the Titans encounter a squad of sword-wielding centurions. They fight against the warriors until their leader, Tara Morgan appears before them.

Elsewhere in Skartaris, the Warlord and Prysm run afoul of a giant serpent. The serpent is the pet of the evil sorceress, Motalla.

Retrieved from "https://heykidscomics.fandom.com/wiki/Teen_Titans_Vol_2_9?oldid=1496282"
Community content is available under CC-BY-SA unless otherwise noted.