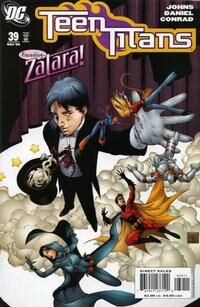 Can I remind everyone again what complete crap this is?

Appearing in "Titans Around the World (Part II of IV)"Edit

Synopsis for "Titans Around the World (Part II of IV)"Edit

The Teen Titans are on the trail of Raven. Having exhausted all normal means of tracking her, they rely upon former members of the interim Titans roster. They stop in Tokyo, Japan where they find young Zachary Zatara in the midst of his magic act. Zatara is the arrogant nephew of Zatanna Zatara. Zachary wants nothing to do with the Titans any longer, and recalls that the short time he spent with them was a terrible experience. He tells them that Raven recently came by to see him, but he does not know her current whereabouts.

The next leg of their journey takes them to Brisbane, Australia. In Brisbane, another former Titan, Miss Martian frees a hostage from an irrational super-villain named Gunshot. After dealing with Gunshot, she turns to speak with the Titans. Like Zatara, Miss Martian also had recent dealings with Raven. She tells them that Raven wanted her to use her telepathy on the Teen Titans in order to ferret out a possible traitor in their ranks. Miss Martian however refused the request, citing that it is against her personal moral code to read the minds of "good people" without their permission.

In the South China Sea, a one-time member of the Titans named Bombshell fights up against the Red Panzer and his robot drones. She fires at them with blasts of atomic energy. The Teen Titans show up and assist her in stopping the Red Panzer. After the battle is won, they ask her if she has had contact with Raven. Bombshell tells them that Raven and she investigated the rumors of a traitor and she points her finger at Ravager.

Retrieved from "https://heykidscomics.fandom.com/wiki/Teen_Titans_Vol_3_39?oldid=1551970"
Community content is available under CC-BY-SA unless otherwise noted.