Start a Wiki
Part of the 'Amazons Attack!' event 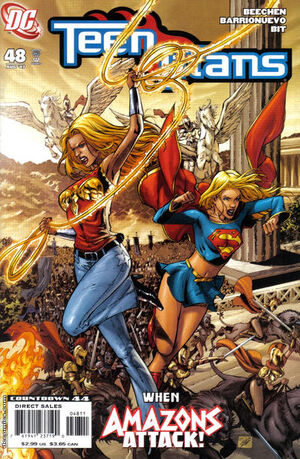 I can do a lot more than punch, Supergirl. In fact... you'll find I'm every bit in your league!

Appearing in "Flags of Our Mothers"Edit

Synopsis for "Flags of Our Mothers"Edit

Wonder Girl and Supergirl fly to a military barricade outside of Washington. Wonder Girl knows that her mother has been imprisoned by the military due to her connection to the Amazons, and she plans on freeing her. Supergirl, having spent a great deal of time on Themyscira, likewise wants to see justice done. The military surrounds them and demands their surrender.

Several of the Teen Titans arrive and try to calm Cassie down. Wonder Girl ignores them and the soldiers open fire. Wonder Girl deflects the bullets with her bracelets, while Supergirl merely lets them bounce off of her. Robin, Kid Devil and Ravager try to reign in Wonder Girl while Miss Martian tackles Supergirl.

During the conflict, Wonder Girl is distracted by intermittent images of Ares. She regains her focus, and rescues her mother. Helena however, has suffered mild injuries during the carnage. Robin tells Cassie that he wants to her her, but she rebuffs his offer.

Supergirl and Wonder Girl fly through the T-Jet, destroying it. They then fly to Queen Hippolyta's Washington-based throne room. She begs Hippolyta to consult with the American president to negotiate a peace. Hippolyta tells her that she has tried, but the President has been unavailable. Wonder Girl and Supergirl agree to find the President and bring him before Hippolyta.

Retrieved from "https://heykidscomics.fandom.com/wiki/Teen_Titans_Vol_3_48?oldid=1510678"
Community content is available under CC-BY-SA unless otherwise noted.