Part of the 'Amazons Attack!' event 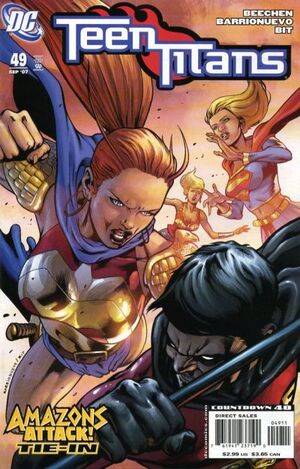 You know, that's really annoying... I don't just breathe Hellfire... I happen to be pretty strong too!

Appearing in "Life During Wartime"Edit

Synopsis for "Life During Wartime"Edit

Armed soldiers surround the Teen Titans. Colonel Nancy Wallace appears on the scene and countermands Major Hanratty's order to arrest the Titans. She asks the Titans to stand down, or else she will be forced to detain them. She tells them that Wonder Girl and Supergirl have attacked Air Force One and that the remaining internment prisoners are being transported to Facility 14 outside the city.

The Titans follow the train convoy, but they keep their distance. In lieu of a working airplane, they all cling to Miss Martian who flies them along the rail line. Without warning, Artemis and two Amazon warriors appear in the sky on winged steeds and attack them. The Titans are forced to land on the topside of the train, and Miss Martian engages in combat with Artemis. Colonel Wallace comes out to see what is going on. Artemis discovers that the train is filled with imprisoned women and grows incensed.

The fight continues for some time, Megan uses her super-strength to stop the train. Colonel Wallace realizes that she was wrong to comply with the orders to arrest innocent women. Major Hanratty pulls rank on her. Superman, Supergirl and Wonder Girl arrive to help out. Supergirl and Wonder Girl are no longer compelled to fight alongside the Amazons and they stand with the Teen Titans.

As the women are being ushered out of the train, two of them decide to make a break for it. Helena Sandsmark chases after them in an effort to convince them that they are needlessly risking their lives, but in doing so, she makes it appear to everyone else that she is actually organizing the escape attempt. Soldiers open fire on her, but Miss Martian deflects their shots. Kid Devil, Robin and Ravager disarm the troops, and Superman melts the firing pins in their weapons with his heat vision.

After matters have calmed down, Wonder Girl apologizes to Robin for her rash behavior. The two share a passionate kiss.

Retrieved from "https://heykidscomics.fandom.com/wiki/Teen_Titans_Vol_3_49?oldid=1482540"
Community content is available under CC-BY-SA unless otherwise noted.