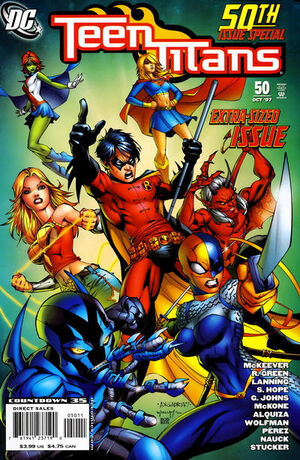 I seem to remember telling you the last time we met don't call me "toots"!

Titans old and new gather for the funeral of Bart Allen, the former Kid Flash. The team shares memories of Bart, including the time he took the batplane for a spin on the way to pick up Superboy from school. The issue cuts to Wonder Woman as she is subdued by an unknown attacker. Later, Superman is subdued by someone who he believes to be Bruce Wayne. Batman is taken while investigating a murder and J'onn J'onzz is kidnapped by a shapeshifter. Ravager gets bored at Bart's service and attempts to go skinny dipping with Kid Devil. Cyborg, Starfire, Beast Boy, Flash, and Raven leave, as Wally recounts his feelings of inadequacy in a flashback to the Wolfman/Perez Titan days. Kid Flash appears as the Teen Titans watch TV. Supergirl recognizes this to be Miss. Martian as Ravager reappears. Cassie gets extremely mad at Megan, while Robin is told that Megan did it to raise everyone's spirits. Lobo attacks a rocket launch and the Titans and Blue Beetle fight him together. Beetle is invited to come by the Tower whenever he wants. Early the next morning, Tim and Cassie share a moment as they discuss how they treated Bart and why they feel badly over it. As they are about to kiss, Wally West appears and warns them that "nothing is what it seems". Wally is attacked as Tim and Cassie are startled to see two members of the Titans of Tomorrow, Superman and the Flash.

Retrieved from "https://heykidscomics.fandom.com/wiki/Teen_Titans_Vol_3_50?oldid=1463259"
Community content is available under CC-BY-SA unless otherwise noted.