Part of the 'Faces of Evil' event 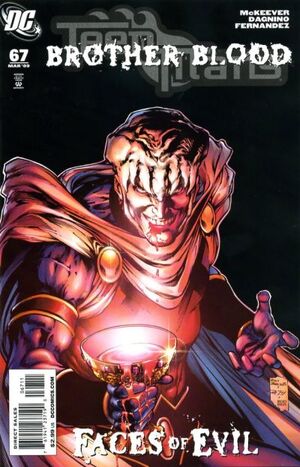 The Church of Blood will rise as nonbelievers die in anguish. Trigon will smile upon us. And that, mother... is when we'll really get started.

Appearing in "The New Deal Part 2: Born in Blood"Edit

Synopsis for "The New Deal Part 2: Born in Blood"Edit

As civil war tears Hell apart, Brother Blood finds the chance to escape. Kid Eternity is present and tries to stop him by summoning the spirit of the deceased Tula, aka, Aquagirl. Eternity's power is weak however, and she only remains long enough to dole out one punch. Brother Blood attacks a demon and draws from him enough power to open a portal to Earth.

Brother Blood arrives in San Francisco and finds himself squaring off against a group of Teen Titans that he's never encountered before. He attacks Red Devil and steals his power, only to discover that Red Devil's blood has been tainted with the power of Neron. Wonder Girl ensnares Brother Blood in her Lasso of Lightning and nearly incapacitates him, but Blood frees himself and escapes through a portal.

He then goes to New Castle, New Hampshire, where he finds a fellow cult member named Elaine. Attacking her, he decides that Elaine shall now serve as his new "mother".

Retrieved from "https://heykidscomics.fandom.com/wiki/Teen_Titans_Vol_3_67?oldid=1548978"
Community content is available under CC-BY-SA unless otherwise noted.