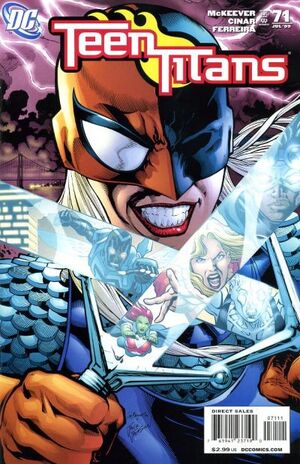 The Teen Titans... they're family. Family. Say it.

The Teen Titans return to Titans Tower in San Francisco, even though it still shows the scars from recent attacks by the Terror Titans and Lycus. The primary concern of the team members at this juncture is whether or not they should keep Ravager on the team. Half of the team value Ravager's presence and want her to stay, though she certainly has her detractors as well – particularly Wonder Girl.

Eddie Bloomberg goes to Ravager's room and finds her packing her bags. He learns that she has been taking epinephrine to increase her ESP abilities. Eddie tries to convince Rose to stay with the team, but their conversation is interrupted by Wonder Girl who wants a private conversation with her. Ravager volunteers to handle a prisoner transfer to Alcatraz Island scheduled for the following morning.

The next day, Wonder Girl learns that both Ravager and Bombshell are on the same transfer duty. She knows that Ravager has been waiting to get her hands on Bombshell ever since she fingered her for a traitor.

As suspected, Ravager takes advantage of her time alone with Bombshell to attack her. During the scuffle, the prisoner, Regulator, is freed and his powers siphon away Bombshell's Dilustel coating. Ravager defeats the powerless Bombshell and makes her promise to take her commitment to the Titans seriously. She makes her repeat the words, "The Titans are family".

Wonder Girl arrives on the skiff and misinterprets Ravager's intentions. After completing the prisoner transfer, they return to Titans Tower. Ravager has already made up her mind though. She is leaving the team. Eddie tries to talk her out of it, but Rose is steadfast. As the group convenes for their next meeting, Rose rides off on her motorcycle.

Retrieved from "https://heykidscomics.fandom.com/wiki/Teen_Titans_Vol_3_71?oldid=1524308"
Community content is available under CC-BY-SA unless otherwise noted.