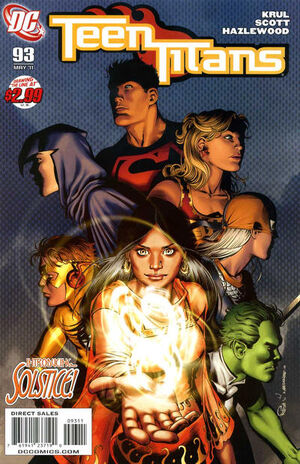 And that's what we are-- not just a team, but a family. One day we might be the Justice League-- But for today, we're Teen Titans

Appearing in "Step into the Light"Edit

Synopsis for "Step into the Light"Edit

The Titans travel to an excavation site in Pakistan, where they are met by Helena, Cassie's mother. They are also met by Cassie's newest friend, Solstice, whose parents recently dissapeared. The Titans politely introduce themselves, but Raven feels reservation towards Solstice due to her light powers and positive nature.

Solstice talks to the Titans about her parents's dissapearance and gives them a photo. Kid Flash takes the photo and checks the excavation site with his super-speed, but he doesn't find them.

Red Robin tells to Solstice that he suspect that whoever kidnapped her parents must be from Pakistan. Solstice doesn't believe this since the excavation site is a place that existed before foreign empire established their borders.

The Titans find a mysterious person nearby and try to talk to her, but the person is revealed to be a monstruous creature called Tataka. The Titans then fight the demonic creature with some help from Solstice.

Tataka begins to teleport away, grabbing Helena. However, Cassie grabs her mother and the three dissapear.

Retrieved from "https://heykidscomics.fandom.com/wiki/Teen_Titans_Vol_3_93?oldid=1482526"
Community content is available under CC-BY-SA unless otherwise noted.