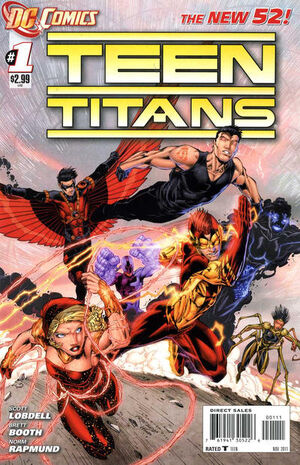 I thought I'd left that world behind me. That maybe I could do more good working from the shadows. Apparently I was wrong. I'm going to need help.

In Westchester, New York, Kid Flash interrupts news coverage of a fire in an abandoned mansion. The fire department has the blaze under control, but getting in front of the cameras, Kid Flash insinuates himself on the scene, much to the annoyance of everyone involved.

Overhearing that one of the fire marshals is trapped on a balcony, Kid Flash rushes into the flames to save him. Unfortunately, in his haste, he forgets about backdraft, and opening the door to the balcony causes a massive explosion of fire that brings the whole blaze to an uncontrollable peak. Kid Flash is knocked to the ground, unconscious, and everyone feels he is to blame.

The newscast continues, and discussion ensues regarding the recent up-cropping of super-powered teens. From his hideout in a Lex Towers penthouse, Tim Drake watches the news coverage and worries about the apparent pattern in the disappearances of several of these teen heroes. Thinking back on his own tenure as Red Robin, he wonders what his mentor Batman was thinking when he brought a teen into crime fighting.

Suddenly, Tim senses someone behind him, and turns to find a man in dark glasses and a team of gunmen waiting. Tim, as Red Robin, has been expecting them to come for him. The man suggests that he has been authorized to give Tim clemency if he agrees to use his talents for his employers. In response, Tim warns that he has rigged the building to explode, and when they realize he's not bluffing, everyone struggles to escape. Leaping off his balcony, Red Robin opens his wings, and flies away as the building explodes.

In Malibu, Cassie Sandsmark drives a stolen car down the Pacific Coast highway. A police officer pulls her over, and she turns on the waterworks, pretending that she's just joyriding in her mother's car. Suddenly, the policeman grips her by the throat and lifts her to her feet.

Fortunately, Red Robin appears, knocking the cop unconscious. He states that he knows that she is the person the media are calling Wonder Girl, and informs her that an organization called N.O.W.H.E.R.E. is after metahuman teens like her. Cassie denies having any powers, but when a chopper shows up and begins opening fire with machine guns, she is forced to reveal her invulnerability.
Angrily, Cassandra transforms, leaping onto the chopper, and smashing it to pieces until it crashes into the ocean. As she crawls back up, she reminds Red Robin that she doesn't want to be called Wonder Girl, and he renews his efforts to get her to join him.

Elsewhere, the man in glasses demands that Doctor Fairchild release their experiment: the Superboy.

They - along with a few other tortured teen heroes - will be the Teen Titans in this new series from writer Scott Lobdell (WildC.A.T.S, Uncanny X-Men) and artist Brett Booth (Justice League of America)!

Retrieved from "https://heykidscomics.fandom.com/wiki/Teen_Titans_Vol_4_1?oldid=1501278"
Community content is available under CC-BY-SA unless otherwise noted.