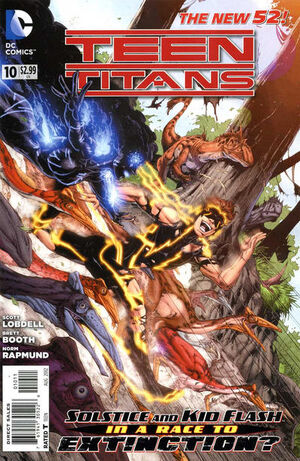 You're talking loco, mi amigo. You think Harvest was the only person out there trying to harm people our age? All you've done is proved the world needs the Teen Titans now more than ever.

Kid Flash has awakened after escaping The Culling in a strange place: an island seemingly populated by prehistoric creatures. One of those creatures has decided that he might be nice to eat. Speeding to escape it, Bart manages to wrap his bird-like pursuer in vines. Grabbing Red Robin as he runs, Bart tries to explain what happened, though Tim reacts to the revelation that they are on an island of dinosaurs with disbelief.

Elsewhere, Superboy and Wonder Girl find their way to a trap door which opens out into the daylight of Dinosaur Island, where the bird-like dinosaur that Bart encountered earlier is struggling to be free of its bonds. Cassie senses that the creature is more scared than savage, and she sets it free, smiling for the first time that Kon-El has ever seen.

Clearly brooding about something, Tim decides to go off scouting on his own, leaving Bart, Solstice, and Bunker behind. Persistently, Miguel follows him, realizing that Tim needs someone to talk to. Tim tries to shake him off, but he slams into a wall of Miguel's creation.

Miguel warns that Tim's indecisiveness about his leadership needs to resolve itself. The other Teen Titans rallied behind his banner, and he is responsible for them. He doesn't have the luxury of falling apart or walking away. Tim realizes his fault, but before he can explain, he is whisked away, and Miguel soon follows. The pair of them have been grabbed out of mid-air by Superboy and Cassie, who are extremely happy to see them both.

Later, Tim, Miguel, Cassie, and Kon-El bathe in a waterfall together. Cassie and Kon-El are concerned about whether they ought to tell the others what they know about the island. They had arrived at night, thinking themselves the only survivors of The Culling, and then a trap door led them to the same beach, only upside-down and in the middle of the day.

Elsewhere, Bart and Kiran race around together happily, and they begin to think about what it means to be free. Kiran had been trapped in N.O.W.H.E.R.E.'s facility, where they corrupted her power from a blessing to a curse, but Bart disagrees. Despite the bad things that she was made to do, all of Harvest's corruption only extended to the surface. Inside, Kiran is more centred than anyone Bart has ever met. He, meanwhile, has begun to wonder if he really is from the future. He was recognized by the kids from the future in the Crucible. Through all their shared experiences, a romance has bloomed, and Bart and Kiran share a kiss.

Meanwhile, Tim explains to Miguel that as he is responsible for the Teen Titans, he feels that the team has completed its mission, and that it is time to disband. Miguel tries to convince Tim that their experience with Harvest only served to prove that the world needs the Teen Titans now more than ever. Tim, however, feels guilty about what happened to Danny the Street, for losing Celine, for letting Artemis get killed. Miguel points out that were it not for Tim's efforts, there would be many more teens dead. They are interrupted by Kon-El, who asks to speak to Tim privately.

Kon-El thanks Tim for leading the Teen Titans in trying to rescue him, knowing full well that he would not have done the same for them. That said, he wants to know why Tim decided to do that. Tim offers a challenge: if Kon-El can't figure out why he was rescued within the next six months, Tim will explain it all to him.

Relaxing in the water, Miguel asks God for a sign that things will be okay. Instead, a large creature leaps on him and sends him underwater. At the bottom of the pool, he discovers some bricks, and realizes that these are the remains of Danny the Street.

After some effort, the Teen Titans manage to collect together all of the bricks. They spot a bottle floating nearby with a note in it, and Red Robin reads that it is a final message from Danny offering to make one last effort to get them all home. Tim tries to refuse, but Cassie reminds him that it's not his place to deny Danny his pride. Moments later, the Titans find themselves in an alley in a strange country.

Elsewhere, Amanda Waller attends the autopsy of a 14-year old girl whose powers got her killed. Waller inwardly debates the ethics of dealing with super-powered teens in her usual way, and eventually decides to activate Operation: Meta Dead Stop.

Retrieved from "https://heykidscomics.fandom.com/wiki/Teen_Titans_Vol_4_10?oldid=1463392"
Community content is available under CC-BY-SA unless otherwise noted.