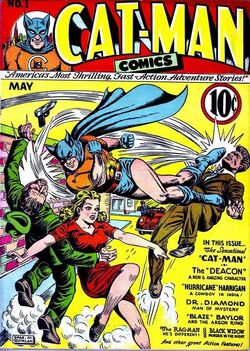 This group of publishers centers around Frank Z. Temerson, and includes many that have long been erroneously considered part of Holyoke. In truth, like Victor Fox's pre and post-war companies and the Blue Beetle series, Temerson lost control of Cat-Man Comics and Captain Aero Comics to Holyoke, and then re-emerged and reclaimed them a year or so later. The exact relationship between Temerson and Holyoke (formerly just a printer, and owned by one Sherman Bowles) remains unclear. The transfer from Temerson to Holoyoke happened almost without disruption in publication, but the return transfer involved a large gap.

Temerson had previously been active in comic book publishing in 1937 in partnership with I. W. Ullman under the name Ultem Publications, Inc., with Harry "A" Chesler serving as editor and content producer. They soon sold their titles to Centaur Publications and reorganized Ultem as Lex Publications, which did not produce comics.

Temerson probably resurfaces in 1939 with Brookwood Publishing Co., Inc. which is currently grouped under Harvey as that is where its sole title ultimately ended up. It shares an editorial address, 381 Fourth St., New York, N. Y., with his next few companies, all of which are found here. However, it's lone title, Speed Comics, was edited by Maurice Rosenfield, nephew of I. W. Ullman, so the Temerson connection is unclear.

Getting to the more certain Temerson companies, Tem Publishing Co., Inc. and Nita Publishing Co., Inc. ran concurrently, publishing one title each for a few months in 1940. Immediately after the last issue from these, he began publishing Green Hornet Comics under the name Helnit Publishing Co., Inc., the business name he would use until losing his titles to Holyoke. All of these exhibit Temerson's fondness for using syllables from his and others names to name companies. "Tem" is obvious, but the significance of "Nit" and "Hel" are not yet known.

Note that several other companies ran concurrent with Tem and Nita and were frequently grouped with them (often as Holyoke). These are all in fact associated with Worth Carnahan, and may be found under that publisher. The error derived from artist Charles Quinlan playing a major role both in Carnahan's companies and then at Helnit and Holyoke, and for the coincidental similarity of Temerson's title "Whirlwind Comics" (featuring a character named Cyclone) with Carnahan's "Cyclone Comics". Additionally, Quinlan re-used the name "Volton" for a character at both companies, but the two Voltons have nothing else in common.

By cover date December 1941, Helnit's comics were being printed by Holyoke. The following month, Holyoke Publishing Co., Inc. debuted having moved into publishing by taking over both of Helnit's then-current titles (Green Hornet Comics having since been sold to Harvey). The contents were unaffected by this move, and both series came out fairly regularly through January 1943, at which point there is a gap.

What emerges from that gap in mid-1943 is Temerson's later company, initially called Et-Es-Go Magazines, Inc. (after his sisters Etta, Esther and Goldie) but soon renamed Continental Magazines, Inc. The Helnit series that had been published by Holyoke were resumed, and new series added. New art director L. B. Cole took over from Charles Quinlan. Under Cole's guidance, the company also packaged comics for several other publishers including Narrative and Aviation (sometimes leading these to also be counted as Holyoke, despite there being no direct connection at all!)

Continental ran out of steam in 1946, but two puzzles remain. The simpler one is a four-issue TV tie-in series, Foodini, apparently published by "Continental Publishing" from the same address used by Continental Magazines, Inc. This has not been verified from actual copies, but the link seems strong enough to include this series here. Please edit this publisher or contact the GCD mailing lists if you have any information on the nature of the connection or on what happened between 1946 and 1950.

The more complex puzzles are the so-called "Holyoke One-Shot" issues from around 1944 (which have no title, publication data or any other information printed on them at all, or even proper covers) which based on issues seen to date reprint early Temerson material (pubished by Tem or Helnit). Due to the confusion over where these come from, and the long-used "Holyoke One-Shot" name assigned to them by Mike Tiefenbacher decades ago, these have been left under the Holyoke publisher.

Retrieved from "https://heykidscomics.fandom.com/wiki/Temerson/Helnit/Continental?oldid=1641000"
Community content is available under CC-BY-SA unless otherwise noted.