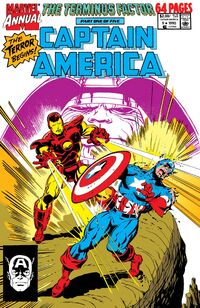 The Terminus Factor was a five-part storyline that ran throughout specific Marvel Comics Annuals during the 1990 Winter season. Primarily an Avengers-centric story, "The Terminus Factor" centered around the return of the alien conqueror Terminus the Destroyer, his Deviant successor Jorro and the robotic Termini.

In this story arc it was revealed that Terminus had seeded the core of the Earth with spores that were released onto the surface by a manned probe sent into a volcano. Iron-man became infected by the spores when he had to rescue the probe and was driven into a berserk rage by them. Captain America was able to save him by drawing him into a protracted battle in the cold mountain range. (The spores at that time required heat to stay viable.)

Although Iron-man and other human infectees were freed, at least one grizzly bear became infected. It began seeking out metal which it began consuming as the spores turned the animal into a techno-organic monster. During this time it came across Machine Man and attempted to consume him. The creature was defeated with the help of Iron-Man, but again the spores survived.

As more of the "Termini" began appearing, the Mighty Thor and Hercules found themselves fighting a small army of the creatures that were demonstrating more than animal-level intelligence. Leaving Hercules to fight the beasts, Thor took to space to find Terminus in an attempt to stop the creatures at their source. Before leaving, however, he removed one of the enchantments from his hammer, [Mjolnir]. Specifically the enchantment that made the hammer return to its owner when thrown. Thor found, battled, and apparently lost to Terminus who then absorbed Mjolnir into himself and headed towards Earth.

Meanwhile, the damage Hercules was inflicting upon the Terminoids caused the creatures to begin consuming each other. The result was the creation of an Terminus-like monster that was now fully sentient. The West Coast Avengers, accompanied by the newly reactivated Human Torch engaged the New Terminus, only to find that it seemed much stronger than the original Terminus (they were unaware that some of the Terminus' they had fought in the past were fakes). The situation became more complicated when Terminus descended to Earth and challenged his offspring to mortal combat. The West Coast Avengers attempted to separate the two giants by use of illusions, but their ruse was short lived and the two monsters finally clashed. The original Terminus eventually defeated his "child" and then consumed him. This resulted in Terminus transforming into a larger, four-armed "ultimate" form. The West Coast Avengers were unable to immediately follow as Terminus set off towards St. Louis.

As the two main branches of the Avengers marshaled themselves, Hawkeye called upon Mockingbird and the Great Lakes Avengers to delay Terminus for as long as possible. Although the GLA looked at this as an opportunity to prove themselves worthy of a full membership into the Avengers the encounter was a debacle for the team as Terminus swatted their plane from the sky, briefly killed team member Mr. Immortal and generally ignored them. When the assembled Avengers task force finally arrived, Mockingbird became incensed at Hawkeye's comment that they were just a delaying action.

Meanwhile in space, Thor, who had been left for dead by Terminus drifted into a small asteroid field with sufficient gravity to have a thin atmosphere. Taking heart that he could enact his stratagem, Thor began to speak an incantation in Asgardian.

Back on Earth Terminus generally ignored the Avengers and protected himself behind a force-field as he used his lance to begin draining Earth of its energy. Quasar lead the team in an effort to push Terminus out into space as he and Spider-man had before, but Terminus stalemated them. Just before Terminus could begin a counter-offensive, Thor finished his incantation which re-established the retuning enchantment upon his hammer. Since Mjolnir was part of Terminus now, Terminus found himself, and the heroes nearest to him sucked into space towards Thor.

Once in space the Avengers were able to separate Terminus from his lance, and this time Quasar used his quantum jump ability to send it too far away from Terminus to reclaim it. As a result, it was discovered that Terminus was much more dependent on his lance than his previous forms and his body collapsed in upon itself. As he condensed into a black hole, Mjolnir returned to Thor, and the Avengers returned to Earth.

Retrieved from "https://heykidscomics.fandom.com/wiki/Terminus_Factor?oldid=1613700"
Community content is available under CC-BY-SA unless otherwise noted.