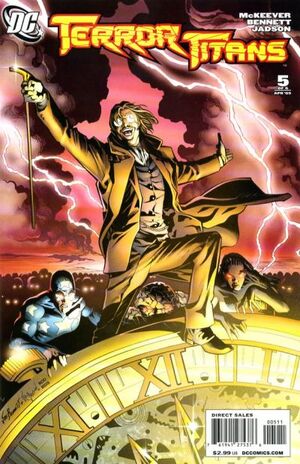 She was gonna try and stop us. She was gonna betray Clock King. And now... it's time this two-faced skank got what she deserves.

At the Dark Side Club, the new Star-Spangled Kid triumphs over Terra and becomes the single-elimination tournament champion. Clock King is very pleased with the results, but the Star-Spangled Kid appears to be one of the few combatants at the club who is not under his mind control.

Elsewhere, Nathan Prince, aka, Copperhead visits TNTeena. She is recovering nicely from her injuries in a previous fight and Nathan and she have grown very close. He comes to realize that he is falling in love with her. Nathan later meets with the Clock King who has a very important solo mission for him.

The Clock King gathers the Terror Titans together and brings them to the training quarters of the arena where the other combatants are waiting. He tells his team that these mind-controlled heroes are now their subordinates under the name the Martyr Militia.

That evening, Copperhead sneaks TNTeena out of the facility. He has her wearing special manacles so as the make it appear as if he were conducting a prisoner transfer. TNTeena tells him that they should run away together. As they reach the security gates outside the club, it becomes apparent what Copperhead's secret mission is. To prove his loyalty to the Terror Titans, he must kill TNTeena. Copperhead activates a device on TNTeen'a gauntlets that brutally mutilates her, ultimately resulting in a horrifying and painful death.

Later, Ravager has words with the Clock King. She discovers how truly sick and maniacal he truly is, and decides to betray the Terror Titans. The other Titans learn of this and attack her.

Retrieved from "https://heykidscomics.fandom.com/wiki/Terror_Titans_Vol_1_5?oldid=1473346"
Community content is available under CC-BY-SA unless otherwise noted.