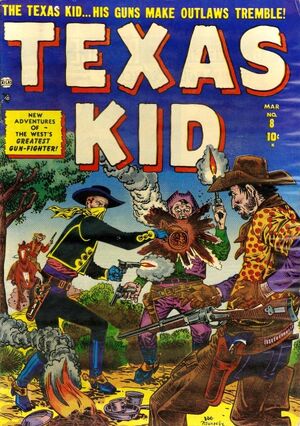 Appearing in "Payment in Lead!"Edit

Synopsis for "Payment in Lead!"Edit

The Texas Kid is on the tail of Snake Gault and his gang, but the outlaws manage to get the better of the hero by tying a snare across the trail that sends the Kid's horse Thunder to send the hero hurtling over a cliff. Believing the Texas Kid to be dead, the gang rides off to continue their latest scheme. However, the Texas Kid is able to save his life by grabbing a tree branch and climbs back to the top. With the outlaws escape and his father possibly worrying about him, the Texas Kid returns to Hidden Valley and changes back into Lance Temple and returns to his father's ranch. Along the way he runs into his father Zane, as well as his friends Red Hawk and Emilio. Emilio tells Lance that Snake Gault has appeared in Caliber City to jump claims.

With a town meeting called, the group ride into the city to listen to the sheriff's announcement on what to do about the situation. As they discuss dealing with Snake Gault and his men, they suddenly burst in and tell them that they have taken over all the mines in the area and murdered all the miners. They look outside and see that the mines are on fire. When Zane rushes at Snake he is struck down. Emilio and Red Hawk keep Lance calm in order to preserve his secret identity, while the sheriff sends everyone home. On the way Lance sends Emilio and Red Hawk with the other ranchers while he goes back to Hidden Valley to change back into the Texas Kid.

Having overheard this is Snake and one of his men, Snake sends his man back to prepare for the attack and follows after Lance, in order to kill the Texas Kid and take his place. Lance is caught changing into the Texas Kid by Snake who then tells him that the Texas Kid is going to help his men lead the ambush against the ranchers. Unwilling to do so, Lance attacks him but Lance shoots him dead. He then changes into the Texas Kid and tells them that he will pretend to be Snake dressed as the Texas Kid then leads the ranchers near Snake's hideout. There the Kid poses as Snake long enough to keep the gangs guard down for the ranchers to ambush them. During the cross fire, the Texas Kid gets Zane to safety, accidentally calling him "dad" in the process.

Soon Snake's gang is wiped out and the Texas Kid rides off. Later, Zane asks Emilio why the Texas Kid would call him "dad" and Emilio suggests that perhaps the Texas Kid called him that as a figure of speech, preserving Lance's secret identity.

A few minutes later he spots a girl on an out of control horse and comes to her rescue. Lance learns that she is Gale Romney, who has come to visit the English Syndicate ranch with her Uncle John. When John arrives and says that the horse was supposed to be gentle. Lance looks over the horse and finds a thorn under it's saddle blanket, the cause of it acting up. John asks Lance to show Gale around while he sees to some business in town. Lance does so and when sunset arrives, Lance rides Gale back to her family ranch. Along the way Gale states that she will be turning 18 on Saturday and that she stands to inherit the family ranch. Just then they are confronted by Killer Jalk and his gang. When they grab Gail she calls to Lance to do something to rescue her. But when she finds out that he is unarmed and that he has vowed to a code of non-violence. She calls him a coward as she is being dragged away.

Realizing that someone is trying to prevent Gail from inheriting her family ranch, Lance rides to Hidden Valley and changes into the Texas Kid and rendezvous with Red Hawk and Emilio and tells them what happened. They track the outlaw's back trail back to their hideout. There they overhear Killer's gang wonder why Gale hasn't been killed. The Texas Kid slips around back alone and overhears Killer demanding that Gail marry him or die and leaves her alone to think it over. The Texas Kid then makes his presence known and has her sneak out the window. However, Killer catches them and a gunfight breaks out. Texas Kid and Gale are outgunned and dive into a nearby river to get away and rendezvous with Emilio and Red Hawk.

They ride back to the English Syndicate Ranch to confront Uncle John, but he tries to flee on Texas Kid's horse Thunder as Killer and the rest of his gang arrive. Texas Kid calls out to Thunder who throws off the strange rider, a gun battle breaks out and Killer and his gang are wiped out by the heroes. In the aftermath, Gail thanks the Texas Kid for his help. The next morning Lance runs into Gale in town and expresses that he is happy that she is free. However, Gail is still upset with Lance and tells him he should be more like the Texas Kid.

Appearing in "Bait For Boot Hill"Edit

Synopsis for "Bait For Boot Hill"Edit

Appearing in "Hoofs of Death"Edit

Synopsis for "Hoofs of Death"Edit

A Native American medicine man named Black Wolf awakens from a dream believing that the gods have spoken prophecy to him: That a white man is to die under the hooves of the buffalo and mark the start of a war between his people and the white settlers in the area. He returns to his village to tell his people of his vision and prepare his people to go to war.

Soon signals to neighboring Native American tribes are seen in the region prompting Emilio and Red Hawk to meet with their friend Lance Temple in Hidden Valley. They arrive as Lance is changing into the Texas Kid to deal with the uprising, believing that peace should be endured no matter the cost. When the Kid learns that Black Wolf is behind this uprising. The Texas Kid decides to go and talk to the local Native chief in order to talk them out of war.

However, at the meeting Black Wolf manages to rowel up the warriors enough to overpower the Texas Kid and take him prisoner. The Kid is tied to a stake and left to be trampled by a herd of buffalo. The Kid calls his horse Thunder who chews through the ropes in time for the Kid to get away. He then catches up with the Native American army and confronts them and challenges Black Wolf to a fight to the finish, the winner deciding if the war will go on or not. Black Wolf agrees and they combat by knife fight on horse back. Thrown off their horses, the Texas Kid wins the fight and when Black Wolf tries to throw a dagger at the hero when his back is turned, the Kid's horse thunder tramples Black Wolf to death. As the victor of the battle, the Texas Kid insures peace in the area.

Retrieved from "https://heykidscomics.fandom.com/wiki/Texas_Kid_Vol_1_8?oldid=1463297"
Community content is available under CC-BY-SA unless otherwise noted.