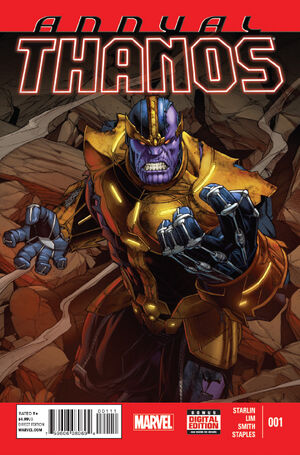 Appearing in "Damnation and Redemption"Edit

• Thanos must face Mephisto, his future self, the Avengers and more!

• Learn how a devastating defeat in Thanos’ past set events into motion that will redefine the Marvel Universe in the near future!

• A prequel to the upcoming THANOS: THE INFINITY REVELATION original graphic novel!

Retrieved from "https://heykidscomics.fandom.com/wiki/Thanos_Annual_Vol_1_1?oldid=1732082"
Community content is available under CC-BY-SA unless otherwise noted.