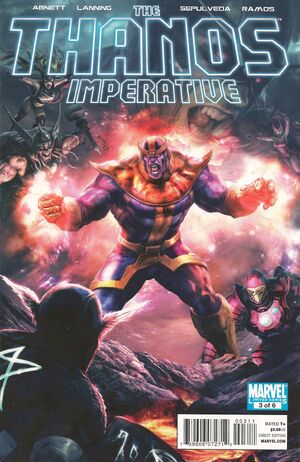 Appearing in "The Thanos Imperative (Part 3 of 6)"Edit

Thanos faces twisted versions of the Avengers—while Nova assembles a star-studded cosmic strike force! As the staggering consequences of the Cancerverse’s invasion become apparent, Star-Lord and his battered band of heroes fight to protect Thanos, who has actually become the universe’s only hope! But it’s literally a life and death struggle, and one being hardwired for destruction may ruin everything! Check out this next stunning chapter and find out why AintItCoolNews says “this writing team has taken the Marvel Cosmic line to levels of cool never before seen”!

Retrieved from "https://heykidscomics.fandom.com/wiki/Thanos_Imperative_Vol_1_3?oldid=1756242"
Community content is available under CC-BY-SA unless otherwise noted.