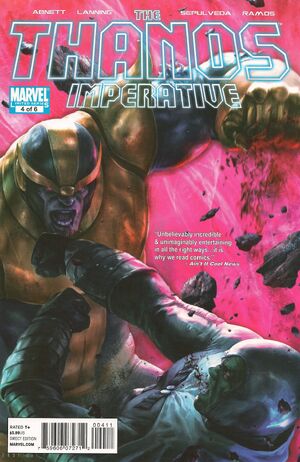 Appearing in "The Thanos Imperative (Part 4 of 6)"Edit

The all-star alliance of sci-fi heroes strike! Silver Surfer, Quasar and Nova lead a make-or-break attack against the undying Lord of the Cancerverse forces! It’s either total victory or utter defeat! Meanwhile, in the Cancerverse itself, Star-Lord’s rag-tag team learns whether attempting to make a deal with Thanos was the smartest choice they ever made—or the worst decision of their entire lives! It’s more star-blasting adventure from the minds of Dan Abnett & Andy Lanning, the writing duo that IGN.com calls “cosmic masters…(who have) deftly placed Marvel's cosmic lineup back on top of the pack!”

Retrieved from "https://heykidscomics.fandom.com/wiki/Thanos_Imperative_Vol_1_4?oldid=1730739"
Community content is available under CC-BY-SA unless otherwise noted.