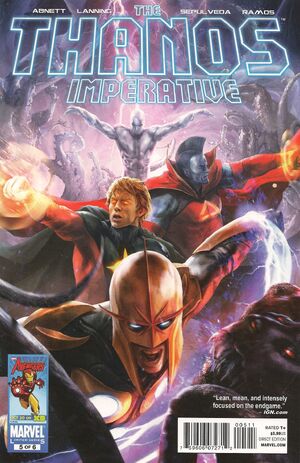 Appearing in "The Thanos Imperative (Part 5 of 6)"Edit

Thanos lives, but now Lord Mar-Vell moves in for the kill! The Undying Lord of the Cancerverse has underestimated the tenacity and fury of his adversary, but no longer! The Mad Titan is outnumbered and outgunned by the Cancerverse forces, and his unlikely allies—Star-Lord, Rocket Raccoon and the other brave misfits—find themselves making a last stand to save the galaxy’s #1 villain! It’s another unpredictable chapter of the saga that IGN.com calls “First class stuff…it’s accessible and epic” and Newsarama.com hails as “one of the most enjoyable reading experiences of the year; it’s a summer blockbuster backed by humor and characters I actually care about.”