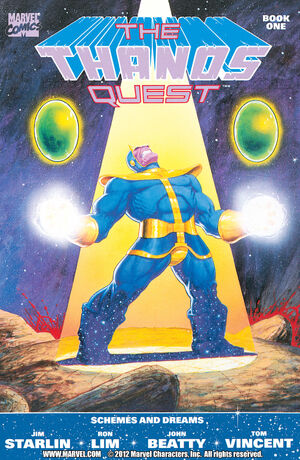 Your fate will lay heavily on my heart, though by all rights it shouldn't. I did not force you to fight me. I gave you the chance to surrender the Gem. You forced me into doing what I did. I had to be faithful to my nature. For, after all, I am Thanos.

Appearing in "Schemes and Dreams"Edit

Thanos embarks on the ultimate quest of love and all-consuming destruction!

Retrieved from "https://heykidscomics.fandom.com/wiki/Thanos_Quest_Vol_1_1?oldid=1463320"
Community content is available under CC-BY-SA unless otherwise noted.