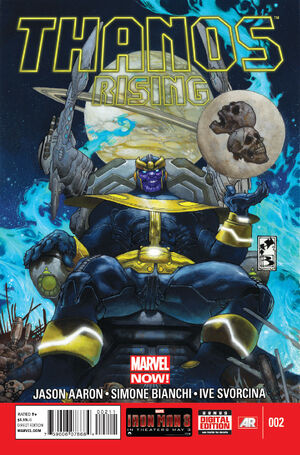 I killed them because I... because I had too much love in my heart, and no place to put it, no one to give it to.

THE RISE OF MARVEL’S GREATEST EVIL CONTINUES BY TWO OF THE MOST ACCLAIMED CREATORS IN COMICS!!

• Continuing the jaw-dropping origin of the mad Titan who will soon change the face of the Galaxy!

The variant cover by Ed McGuinness was actually the original cover for the first issue of the cancelled mini-series Thanos: Son of Titan.

Retrieved from "https://heykidscomics.fandom.com/wiki/Thanos_Rising_Vol_1_2?oldid=1463328"
Community content is available under CC-BY-SA unless otherwise noted.