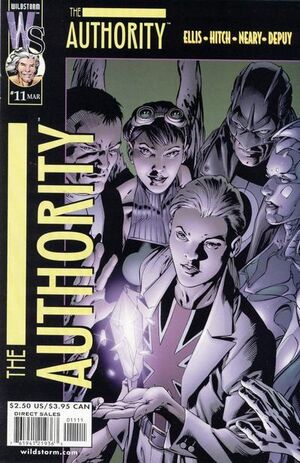 This is Jenny Sparks for the Authority. By now, everybody knows that there is something eclipsing the sun. It is an organism, and it will attain Earth's orbit in less than a day. Its presence is related to the events in central Africa and Tokyo. The Authority is assuming the worst; that when it gets here, it will attempt to expunge all life from this planet. We are going to take the Carrier out of orbit to engage the creature with the intent of ensuring it never gets near you. We'll do what we've always done for you, whether you knew it or not -- the absolute best we can. We're going out, and we may not be back for a while. And while I'm gone, you all bloody well be good.

The Engineer witness the massive object ("God") eclipsing the sun. The Authority on the Carrier receives Angie's report which Swift also scan and discover that the object is larger than the moon and its organic. Worse, its moving to Earth's orbit in about a day. Jenny Sparks momentarily relapse of the situation and then contacting the Engineer if she is capable for space flight and needs to be at the moon. Angie confirms it, but may take an hour to construct. But Jenny needs her at "five minutes". Also Jenny then contacts Apollo to await for Angie.

On Earth, the Engineer constructs a space suit for space flight and launches to the moon where she reunites with Apollo. After being impress with being on Earth's moon, the Engineer and Apollo are then order to recon on the incoming object. There they surprisingly discover that "God" is a gigantic organic pyramid.

On the Carrier, the Doctor informs his team that the being closest to God, of its intention to cleanse its original home from the humans which it regards as pest, given with the event in Tokyo. Now given that its spores that were to cleanse the humans are destroyed, it plans another alternative. Jenny then contacts the Engineer of planning any possible solution to kill "God" such as ramming the Carrier and allowing it baby universe to explode. Angie dropped down that plan as the release of the infant universe would destroy all of existence, but also pointing out that they had never convinced the Carrier to move out of Earth's orbit. After hearing this, Jenny has a plan...

Meanwhile in Manhattan, Jackson King is frustrated with everything that is happening in response to the appearance of "God" that is causing people to panic and riot. Christine Trelane quiet him and they both listen a world wide broadcast from Jenny Sparks. Sparks tells the entire world about the creature that is threatening the Earth and that the Authority will attempt to stop this thing and may never be back. In her last words, Jenny then tells that everyone must be "bloody good" when she is gone.

After finishing her announcement, Jenny ask her most expert team of whether they can convince the Carrier to leave Earth. Jeroen and Swift elaborates that the Carrier has sentient feelings and it is reason that it stayed near Earth because in the hopes of being found by its original owners. Though the task would be difficult, the Engineer connects with the Carrier as the Doctor helps her guide her thoughts. Moments later, the Carrier is convinced and Swift pilot it out of Earth's orbit.

Out in space, Jenny and the Doctor are alone together. Jereon tells her that he knows what will happen to her at the end of 1999, and that there is nothing for him he can do to help her. Jenny then tells the Doctor that he must never talk to anyone about it and simply help her to stop "God".

The Carrier finally arrives to the organism. After the Engineer regroup and tells that they are in the being's field of gravity. Jenny then tells Swift to find a pore or an orifice so the Carrier can enter into "God" as fighting the organism from the outside would do nothing. Furthermore, killing the being from the inside is substantial as the Carrier enters into "God".

Retrieved from "https://heykidscomics.fandom.com/wiki/The_Authority_Vol_1_11?oldid=1413141"
Community content is available under CC-BY-SA unless otherwise noted.