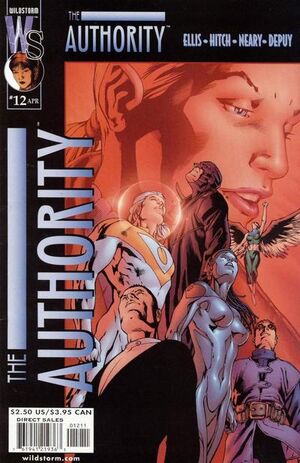 You out there. I'm talking to you. I don't know if you can hear me out there. I don't know if you even have a language. But here's the deal. It took me a long time to work out what I was here for. And here, at the end of the century, I finally sorted it out. I'm here to save the earth. I'm here to get us all through this century. You might think the planet behind us is yours to use, but here's the news: Earth is under new management. THIS WORLD IS MINE.

The Carrier continues to cruise into "God's" veins. Inside the Carrier, Jenny orders intel on a entire map of the being and its vulnerable organs that they can destroy and kill the being. Swift analyze the Carrier's information on the being and finds that it has four thousand hearts, nulling the idea of killing via its heart(s). Jenny then decides on finding its brain and suggest of exploding the Carrier's baby universe there. Midnighter then converse with her concerning that they will fight "God's" immune system and that the Carrier needs weapons. Jenny ask the Engineer if the Carrier is armed with weapons. Angie states that it is originally a merchant-class vessel, but it is possible that like trading ships that were armed with cannons in the past it is possible that the Carrier is also armed. Jenny then brings the Engineer to the Carrier's core engine room, displaying the caged infant universe. The Engineer elaborates that it is what powers the Carrier and that exploding it to kill "God" would consume and destroy everything in the known universe. Jenny, however, thanks Angie for showing her.

At the Carrier's bridge, Jack Hawksmoor and Midnighter witness a sort of organic city. The Doctor explains that the city is constructed and lived by the being's sapient parasites. Now the parasites are about to attack the Carrier after learning of the Authority's intention of killing their host. Midnighter ask Swift if the Engineer has the Carrier's weapon system on. Swift confirms it, but will not utilize as she will not kill these beings. She then communicates to the parasites in a suitable for late type zero civilizations, telling them that the Authority pose no harm to them and only wanted to destroy the organism called "God". Initially the parasites bombard the Carrier but soon gained Swift's message and relent peacefully. However, the Authority's peaceful moment is cut short as the being's antibodies attack the Carrier. Swift desperately steers and direct the Carrier to the being's brain, in an attempt to outrun the antibodies. Apollo quickly provides defense as he flies out of the Carrier and engages the antibodies. After the Engineer have the Carrier's weapons to create a path to the brain, Jenny's time is close.

Suddenly some of the antibodies reaches to the Carrier and breaches the vessel's bridge. The Authority fights off the invading antibodies as the Carrier reaches to the brain. Jenny Sparks tells "God" that she is sworn to protect humanity in the lasting days of the 20th century, and that Earth isn't belong to it. She then electrocutes the creature's brain via its electrical fluids, thus killing it.

The antibodies cease and dies, and the Authority rush to a weaken Jenny Sparks. Jenny explains that she is dying as being the Spirit of the 20th Century, she is destined to pass away at the end of the century. She assures everyone and finally tells to only save the world for the better or "I'll come back and kick your heads in" before expiring.

As she dies, Earth celebrate the new century as a spark of electricity streak across the sky and a baby is born.

Retrieved from "https://heykidscomics.fandom.com/wiki/The_Authority_Vol_1_12?oldid=1413142"
Community content is available under CC-BY-SA unless otherwise noted.