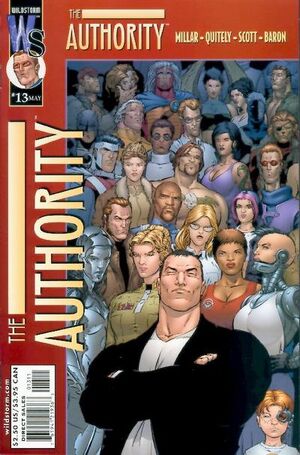 The 21st Century is a bad time to be a bastard.

Appearing in "Nativity (Part I of IV)"Edit

Synopsis for "Nativity (Part I of IV)"Edit

The Authority is in Southeast Asia taking down a president who ordered the slaughter of those who opposed him. The team leaves the president at the mercy of the locals he oppressed.

After the incident in Southeast Asia, The Authority becomes the center of media attention. The various members visit with the media to justify their actions.

Later, Jack Hawksmoor visits Jenny Sparks' grave. The Doctor joins him and reveals that Jenny's energy has been transferred to a newborn child who will grow up to be the Spirit of the Twenty-first century. He also makes Jack aware that The Authority is not the only group out looking for the child.

On The Carrier, the team is throwing another celebration party and various heroes are in attendance. Jack gets a call from the U.S. president warning The Authority not to interfere in United States affairs. Jack tells the president that The Authority protects the world, not just America and they pay allegiance to no one.

In a U.S. intangible military command center called The Hangar, two technicians sit at a large computer console. They inform a Dr. Krigstein that they have located the code-name: Jenny Quantum in Singapore.

At a hospital in Singapore, a group of S.P.B.'s arrive looking for the child, Jenny Quantum. One member called Tank Man kills all the babies in the maternity ward to see which one is Jenny. But none of the babies survive and they realize Jenny is gone.

The Doctor has Jenny cradled in his arms as he runs through the streets of Singapore desperately trying to summon a Door. The rest of the S.P.B.'s surround The Doctor and he's trapped.

Retrieved from "https://heykidscomics.fandom.com/wiki/The_Authority_Vol_1_13?oldid=1413143"
Community content is available under CC-BY-SA unless otherwise noted.