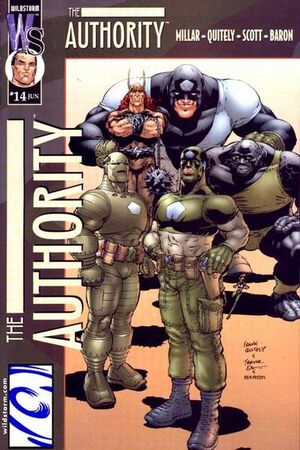 Two whores, a junkie, a couple of sissies, and a moron who can't even tie his own shoelaces wants to tell the rest of the world how they should be living their lives? It'd be funny if it wasn't so goddamned tragic.

The Doctor cradles the newborn Jenny Quantum as he comes face to face with the S.P.B. team known as The Americans. Even though The Doctor tries to explain to them why it would be a bad idea to kill the Spirit of the 21st Century, The Americans assure him that they know who Jenny is and are prepared to carry out their mission to kill her anyway.

The Americans explain that Titan is blocking The Doctor's link to his powers and they offer to let him go if he'll kill Jenny. He refuses and Titans grabs an airplane flying over head and proceeds to smash The Doctor and Jenny. Suddenly, Jenny begins to glow and a huge explosion of energy engulfs the city.

On The Carrier, Swift enjoys some private time with Gen 13's Grunge. But it is cut short when Jack radios them all to rally because there's trouble in Singapore.

Back in Singapore, Titan's legs have been blown off by the blast from Jenny Quantum. But The Americans receive orders that they are now supposed to bring Jenny back alive, which means they're allowed to kill The Doctor. But The Doctor makes them aware that Titan's injuries have granted him his powers back and the rest of The Authority (Earth-50) arrives. Midnighter smashes one of The American's head's in while Apollo flies through the giant Titan's head.

At the secret location called The Hangar, Dr. Krigstein watches and decides that capturing Jenny will allow him to shape the 21st century how he sees fit.

Storm-God zaps Apollo with a lightning bolt while another of The Americans tries to take down The Engineer. But Angie flies him out into space and he explodes. Jack tells The Doctor to escape with Jenny and he does so by heading into the Dreamtime dimension. But he encounters another member of The Americans who is able to enter Dreamtime as well.

Shortly afterward, The Americans are recalled to base. The Doctor reappears to telling the team that Jenny has been taken.

Retrieved from "https://heykidscomics.fandom.com/wiki/The_Authority_Vol_1_14?oldid=1413144"
Community content is available under CC-BY-SA unless otherwise noted.