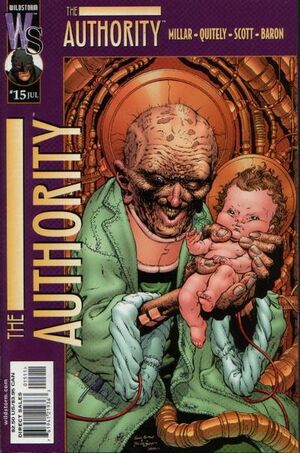 Man, if you were serious, you wouldn't be pointing those things at someone with the power to give you double-D sized breasts just by clicking his nicotine-stained fingers.

The remaining Americans take Jenny Quantum back to Dr. Krigstein.

Midnighter cradles the defeated Apollo in his arms as The Authority stands around them both.

The media blames The Authority for all the casualties in Singapore. So, Jack Hawksmoor broadcasts a worldwide message telling the truth about what happened. Christine Trelane radios in and tells them about the group she believes is behind this.

Meanwhile, Apollo flies around the world recharging himself.

The Engineer and The Doctor head to a secret military base to get information. Afterward, Angie invites the team to join her in The Hive-Mind, a virtual reality powered by her nano-bots that will allow them all to experience the information they just obtained instead of simply reading it.

They learn about Dr. Jacob Krigstein and his involvement in creating dozens of S.P.B.'s during the last century. But when the Cold War ended, Krigstein was cast aside by the U.S. government so he went underground and continued to create S.P.B.'s for his own personal gain. They determine that Krigstein wants Jenny in order to shape the new century the way he wants, without The Authority getting in his way.

The team sets out to find Krigstein's secret base called The Hangar. They discover it in Manhattan. But before they can do anything, Krigstein launches a simultaneous attack on major cities across the world. Teams of S.P.B.'s are teleporting into each city, including right in front of The Authority.

Retrieved from "https://heykidscomics.fandom.com/wiki/The_Authority_Vol_1_15?oldid=1413145"
Community content is available under CC-BY-SA unless otherwise noted.