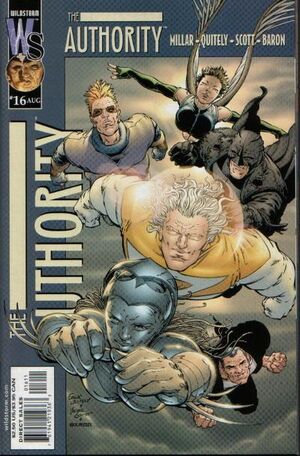 Who would have thought a few ads in some muscle-building magazines and a line of children's comic-books would have solicited such a tremendous response.

S.P.B. teams are simultaneously attacking major cities around the world. The Authority splits up and they each head to one of the cities. Midnighter takes on the team in Manhattan, Hawksmoor takes on the team on in Paris, The Doctor takes Moscow, The Engineer takes Beijing, and Apollo takes Washington D.C. where he confronts the remnants of The Americans.

Meanwhile, Swift arrives at an entrance to The Hangar. Krigstein is convinced she can't get in but she does with a little help from baby Jenny.

As Wildcore deals with S.P.B.'s in London, Swift confronts Krigstein and instead of asking him to surrender, she asks him to join The Authority. He agrees.

Later on The Carrier, The Authority celebrate their victory and muse about how things will be different now that they have the Spirit of the 21st century.

Retrieved from "https://heykidscomics.fandom.com/wiki/The_Authority_Vol_1_16?oldid=1413146"
Community content is available under CC-BY-SA unless otherwise noted.