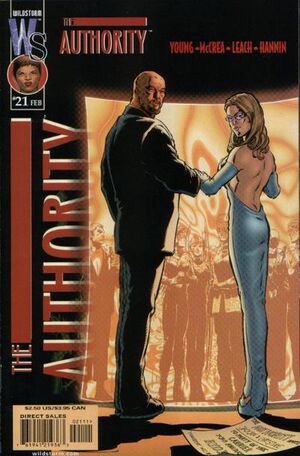 Appearing in "All Tomorrow's Parties"Edit

Synopsis for "All Tomorrow's Parties"Edit

It's early 2000, The Authority have just toppled a south east Asian dictatorship and are having a party on the Carrier and everyone's invited, Including Jackson King and Christine Trelane. However, Jackson is none too pleased about attending, going more for the fact that the head of the UN bureau for Metahuman affairs, Shinya Hoshino, has asked them to go and liaise with the Superhero community.

Meanwhile, down in the Engine room, The Engineer and The Doctor are having a talk about how if Stormwatch hadn't killed their predecessors, they would never have become heroes, and the refugees the Authority had saved might not have been rescued. Union kills himself, with nobody noticing. Back at the dance floor, Christine dances sensually to the Chemical Brothers while Apollo has a conversation with a barman who knows him very well. Jackson decides it's time to go, but Christine reminds him they haven't talked to everyone yet. Jackson uses his telekinesis to clear a path off the dance floor, and stalks off in a rage.

While Jackson stares out at the Earth, Christine runs into Flint, who hasn't been enjoying herself either. They head off to the Carrier's baths, where they hop into a hot tub. Jack Hawksmoor goes to have a chat with Jackson, at the insistence of the rest of the Authority. They end up arguing and fighting, and Christine reveals to Flint that she hasn't had a period in 18 months, her powers are gone, and she feels like something is "rearranging her Feng Shui". As Jackson goes back to staring at the Earth, Energy starts emanating from Christine. The Bartender looks up, the same energy coming out of his eyes.

While Jackson is staring out the window, images of Henry Bendix and his father, Despot, appear, and advise him to stop sitting back an popping anti-depressants and start actually doing something. They remind him that he has the key to the Nevada Garden, and that Christine will back him to the hilt. She appears, naked, sitting atop the earth, telling him they've got work to do.

Jackson picks up Union's Justice stone, and goes down to the baths and gets Christine, telling Flint that they're going to make a brand new band. They head for home, planning to marry, gather the faithful, and do great things.....

Retrieved from "https://heykidscomics.fandom.com/wiki/The_Authority_Vol_1_21?oldid=1413151"
Community content is available under CC-BY-SA unless otherwise noted.