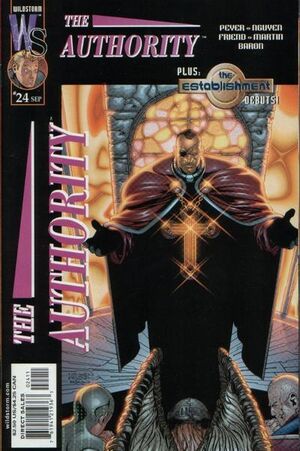 Appearing in "Transfer of Power (Part II of IV)"Edit

Synopsis for "Transfer of Power (Part II of IV)"Edit

The G-7 Authority are in the Carrier's junction preparing to head back to Earth while having a televised prayer with the team's religious figure, Chaplain Action. However, after they are finished televising, the prayer was more of a public relation stunt to show the public's an image of the team as being more "pious" and morally-grounded. As the Authority about to leave, Chaplain calls over Teuton and Last Call to let them know that he is available for "guidance". Last Call, understanding what Action meant, angrily states to him that he himself isn't what everyone thinks.

On Earth, the Authority discovers that every enriched city and nations, such as Manhattan and Monaco, are impoverished third world nations. The Colonel and Machine take measures in relieving the first world nations by forcefully stealing relief supplies from current third world nations, starting with attacking a relief convoy in Somalia. After having stealing the supplies, the Colonel then sent Machine back to the Carrier in finding out the reason for the "class disruption". In communicating with Machine, The Colonel is worried about their situation was a reprieve for the dumping of the dead and wounded Asian refugees into a dimension, and the possibility of having themselves being eliminated by Seth Cowie for their failure as "superheroes".

Meanwhile in Southeast Asia, Jacob Krigstein is disgusted with the new Authority and recalls how he established and created superpowered beings for the American government, and now accuse them for stealing his ideas that created the current Authority. From encouraging advice from Housemark, Krigstein decides to show his "weirdies" for the G-7 Authority to handle.

In Beverly Hills, Teuton and Last Call delivers relief supplies to the impoverished, as the people desperately scramble and fight over a bag of rice. Last Call berates Teuton for his oversensitive feelings and reveals to him that many people (including Action Chaplin) believe that himself and Teuton are homosexuals, given that they replace Midnighter and Apollo, in which they are both not. As Last Call states the public's mistake for them, a group of dimensional shiftships emerges from a 'door' and attacks, killing the surrounding people. Teuton takes the initiative and attacks a shiftship, and surprisingly discovers that the pilot is an Asian human. The other Authority members head to Beverly Hills and fends off the shiftships' assault. The Colonel then contacts Machine and learns from her that the warships that are attacking came from Re-Space, the realm that the Authority had deposited the refugees from the Carrier, equaling that the refugees are the one's responsible for the "class disruption"; furthermore, the G-7 Authority are at fault for causing the situation that they are dealing with to happen.

Appearing in "The League of Gentlemen: A Story of the Establishment"Edit

Synopsis for "The League of Gentlemen: A Story of the Establishment"Edit

Retrieved from "https://heykidscomics.fandom.com/wiki/The_Authority_Vol_1_24?oldid=1413154"
Community content is available under CC-BY-SA unless otherwise noted.