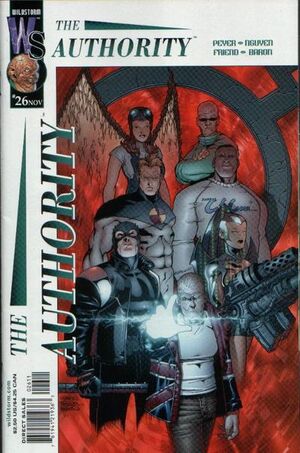 Appearing in "Transfer of Power (IV of IV)"Edit

Synopsis for "Transfer of Power (IV of IV)"Edit

Having been changed to the original Authority, Dinh explained to them about the realm of RE-Space as being a realm of "Second Chances" that allows people to change the natural laws that in which caused the "top one percent" to turn into poor third world nations. In gratitude for the original Authority for respecting the refugees, Dinh allows them to make a simple wish in changing the world back on Earth. In this process, Jenny Sparks is introduce to Re-Space's Lamp and wish it for Earth to be devoid of weapons, in which many hand-held weapons and military vehicles are melted and destroyed. As the "Authority" celebrates, "Midnighter" finally come to his senses due to his homophobia and changes back to Late Call who quickly brutally kills Dinh and causing the Authority to revert back to their original selves. However, upon Dinh's death, the constructed reality of Re-Space starts to collapse upon itself. The G-7 Authority escape back to the Carrier, but for the Colonel to stay behind in order for him to wish the Lamp to revert everything back on Earth to the way it was before. After saving the world, but upon returning home, the Colonel finds himself summoned by the Old Man to explain how the world's top 1% nearly ended up destitute, and what the Authority did about it. The Colonel consults with Chaplain Action for support in his questioning, in which Action firmly advise the Colonel in telling the whole truth to the Old Man about everything that has happen, including the mass murder he committed upon the refugees, and decides to come with him.

At the Old Man's office, the Colonel explain everything that has happen. However, the Colonel is clear of all charges when Chaplain Action further proves the Colonel's innocence in which he restores the Earth's status quo and never even use it in his own selfish gain. For his heroism, the Colonel is awarded in Yankee Stadium. The Old Man then informs him of Dr. Krigstein's potential attack on the Colonel and the G-7 Authority (and as well in requesting the Authority in taking care of environmentalists who are protesting against oil drilling in Alaska), in which the Colonel assure him that everything will be done.

In the last panel, the G-7 Authority (Earth-50) are seen fighting against Krigstein's "super-assassins" as the Colonel proclaim his satisfaction with his 'career' as a hero.

Retrieved from "https://heykidscomics.fandom.com/wiki/The_Authority_Vol_1_26?oldid=1413156"
Community content is available under CC-BY-SA unless otherwise noted.