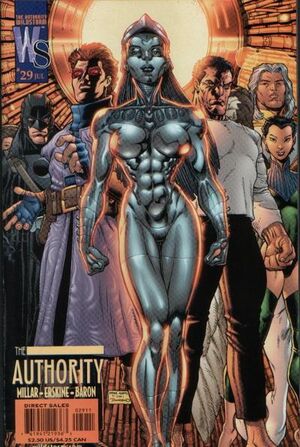 A freed Swift finds Angela Spica and confronts her "husband". She informs Angie of her memories and role as the Engineer as the G7 Authority's Machine's nanites that control them are offline due to her death by Apollo, and as well about Seth Cowie's fail-safe from the people who grafted him. Angie's "husband" is not too frighten and warns off Swift that his superiors will come after her. But Swift shows him the decapitated heads of her software billionaire husband and a television mogul, and intimidates the fake husband to walking into a shift-door which Swift states leads to the bottom of the ocean. After this, Swift tells Angie that she needs her as the Engineer and to find Jack Hawksmoor.

On the Carrier, Seth taunts Apollo over Midnight's death-like state, forcing Apollo to furiously battle him in the Artic Circle.

Meanwhile, in the Garden of Ancestral Memory, Jeroen Thornedike returns to his normal state after the death of the Surgeon. He learns from his predecessor that the workers and soldiers that were in the garden were easily defeated and "converted to whichever faiths they were attempting to demolish." Jeroen is then concern about the rupture in the Bleed that threaten space and time, but his predecessor recommend for now that his friends needs him.

Back in the Artic, Apollo tears off Seth's cybernetic parts. Seth said to Apollo that he is more a victim as he is as his government abducted him by force and implanted the various superpowers to do their bidding. However, Apollo doesn't care and incinerates Seth. Apparently killing Seth, but the monstrous metahuman is alive due to his powers as he grasp Apollo's head from behind.

Swift, Angie and Jack reunited and are aboard the Carrier. The trio finds the Machine's corpse which Angie regains her nanites, becoming the Engineer once again. Then they find Jenny and Midnighter, who is still barely alive. They quickly have Midnighter brought to the shiftship's emergency room and contacts the Doctor for his help. Swift then tries to contact Apollo. But, unknown to her, Seth impersonate Apollo's voice and lying about fighting Seth and prepares to come back. Swift then has everyone headmailed with the fail-safe code for Seth. At this moment Seth arrives while bringing along a defeated Apollo, and quickly overpowers each member of the Authority. As Seth is about to finish off Hawksmoor, Jenny Quantum gets his attention by saying the fail-safe code: "Welcome to the Oval Office President Gore." With this, Seth lose his powers and reverts to his real normal state of a frail and weak redneck. The Authority then surrounds him.

Swift and Thornedike brings Seth to his home and transform him into seven hens. Inside Seth's house, his uncles investigate outside and discover the chicken Seths. The uncles are overjoy in seeing the hens as they look lustfully at the shocked chickens.

Back on the Carrier, The Doctor oversees Midnighter's condition. After Midnighter becomes stable, the Authority is concern about the Bleed's hemorrhage that will allow parallel universes to breach into theirs and plans on how to deal with it. Jack gives a simple answer: doing nothing. The others are surprised of Jack's answer, but Jack reason that the people they helped brought their own downfall and cause the Bleed to hemorrhage, and that they deserve for this. Furthermore, he tells the Engineer to contact every post-human to not do anything about the Bleed. The Doctor tries to reason with Jack, but Hawksmoor wants to trust him as the only way to save mankind is for mankind to save themselves for once.

Sometime later, Hawksmoor's belief came true as Earth's people somehow stopped the Bleed from hemorrhaging as they celebrate their survival. At the White House the President congratulate with his Russian counterpart for mankind saving the day without the need of "some clown in a mask who likes wearing his panties over his tighties." Just as he said this, the Midnighter kicks the Oval Office's door down, and he and the Authority confronts the President. Nervously, the President reason them that he isn't personally involved in "neutralizing" them and that he is only a "symbolic figurehead for a huge coalition of interests." Unfortunately his excuse doesn't save him as Midnighter have the Engineer summon a shift-door for the President to be sent to Iraq.

On the next day, the Authority and their friends and allies celebrates the marriage of Apollo and Midnighter. Following the marriage, Angie dances with Jack and wonders if they really make a difference in the end. Jack reply that they really did change the world for the last twelve months as humanity replaced them with the failed G7 Authority and that the people that had disagreed with the Authority finally ended up following their lead. Jack finalize that they changed things forever, and that "there's no going back now."

Retrieved from "https://heykidscomics.fandom.com/wiki/The_Authority_Vol_1_29?oldid=1413159"
Community content is available under CC-BY-SA unless otherwise noted.