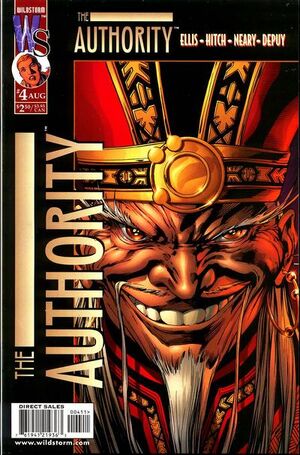 I love being me.

Appearing in "The Circle (Part IV of IV)"Edit

Synopsis for "The Circle (Part IV of IV)"Edit

The Midnighter is busy making his way towards Kaizen Gamorra's compound, and has to beat up several people to get there. All the while, the Authority is busy fighting off the largest number of Gamorra clones yet. The Doctor takes out about half of the opposing force, but must return to the Carrier after he passes out from the strain. The Engineer creates a web of knives that split the atoms of several more attackers. Apollo has trouble fighting off a huge number of them, but gets help from Jack Hawksmoor and Swift.

The Midnighter discovers that Kaizen has some kind of Genetic Reactor that is pumping out superhumans at an exponential rate. He doesn't know how to destroy it, until after a short conversation with Kaizen Gamorra himself. He returns to the Carrier, and rams it right into Gamorra's tower. The tower is destroyed, along with the Reactor inside. Presumably, Kaizen perished as well, although nothing is certain.

The Authority saves Los Angeles, and Jenny Sparks delivers a message to the Earth on behalf of the Authority: "This is Jennifer Sparks speaking for the Authority. You are not alone."

Retrieved from "https://heykidscomics.fandom.com/wiki/The_Authority_Vol_1_4?oldid=1413134"
Community content is available under CC-BY-SA unless otherwise noted.