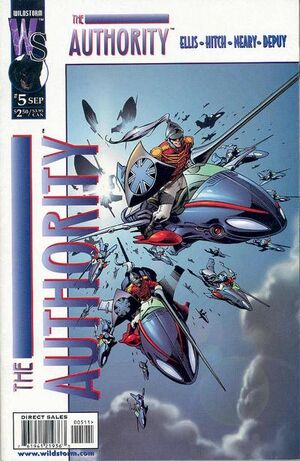 In Sliding Albion, an alternate Earth where aliens and humans coexist together and London runs the rest of the world, Yngvi, a "blue blood" tells his king (a human of the Windsor family) that they need a war. The king insults Yngvi for being part alien and tells Yngvi that he's in his kingdom now, as the two of them walk into the throne room where a drunken party is taking place. All of a sudden, the king starts hearing voices. Someone, a blue blood, is taunting him, saying that he gave the Windsor the kingdom and that he's isn't respecting the gift he received. The king becomes deeply scared, pulls out his gun and starts firing wildly, killing all his guests. As he's shooting, a hand grips his head and crushes it. Regis, the owner of the hand, appears out of thin air and tells Yngvi that he can rule now before saying that they're going to war. He goes to eat the former king's children.

On board The Carrier as it cruises over the mind barrier reef, Angie reminisces with The Doctor and Jack Hawksmoor about life before she became The Engineer.

In the air above the-still-being-rebuilt Los Angeles, several hundred ships come from Sliding Albion and start destroying everything in sight. Christine Trelane phones Jenny Sparks and informs her of the situation and The Authority quickly leaves for L.A. As they appear through a rift, Jenny recognizes the ships as coming from Sliding Albion. The team starts to fight the ships and Jenny tells them that the world is being invaded by a parallel Earth.

Retrieved from "https://heykidscomics.fandom.com/wiki/The_Authority_Vol_1_5?oldid=1413135"
Community content is available under CC-BY-SA unless otherwise noted.