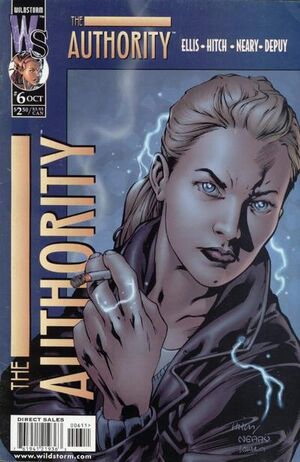 In a flashback of Jenny Spark's past from the 1920's to the 1950's. Jenny Sparks narrates that the British government and herself encountered an alternate reality dominated by blue, alien hybrids codenamed as "Sliding Albion." In 1953, Jenny Sparks meets Saul Baxter (Lord Emp) at a secret gathering which includes "blue bloods". She reveals that the British government has been hiding the existence of the Sliding Albion since they first appeared in the 1920's. Later, Jenny receives word that Sliding Albion has gone to war with Europe on their parallel Earth and that they stand on the verge of Parallel World War One. In an act of desperation, Sliding Albion opens a rift between the two worlds, effectively deflecting a biological attack on the populace of Wildstorm's London.

In the present, the forces of America's air force, the Authority and the shiftships of Sliding Albion continue to battle each other over Los Angeles. Jenny Sparks stop the invading forces by projecting a giant electrical spectrum of herself in which many of the enemy shiftships are disable in midair. Sparks then warns the remaining invading forces and force them to retreat back to their reality.

Back on the Carrier, Jenny Sparks informs her teammates a brief explanation of the reality of Sliding Albion: in a parallel Earth, a group of aliens known as the "Blue" visited the planet during the Renaissance in which the royalty of Europe and the visitors coexisted and interbred. By the early twentieth century the resultant fusion of culture led to the establishment of a imperialistic society based in England known as Albion. However, this society was becoming stagnated in which the denizen of Sliding Albion seek to invade other parallel realities. Eventually they discover and made contact with the British government of the Wildstorm universe.

After Jenny finish her story of Sliding Albion's withdraw from the Wildstorm universe in 1953, she figure that contacting a known "indigene" from Sliding Albion who is held as a prisoner will explain as to why Sliding Albion is invading Earth again. After contacting a listening post of British Intelligence in seeking access to the prisoner, Jenny brought Swift and the Engineer to see the prisoner in Rendelsham, England. The three Authority members meet the prisoner known as Lorenzo, who is reveal to be Jenny's ex-husband.

Retrieved from "https://heykidscomics.fandom.com/wiki/The_Authority_Vol_1_6?oldid=1528855"
Community content is available under CC-BY-SA unless otherwise noted.