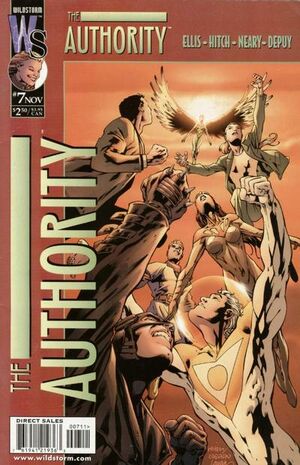 Apollo falls over and everyone wants to know why. I get sliced up so fine you could make sandwiches out of me and does anyone run to my rescue? You're all bastards.

In Sliding Albion, Regis converse with Yngvi in a graveyard, talking and lamenting about their (Blue) race being close to absolute extinction. Yngvi relates the events of the invasion raid in Los Angeles and the intervention of the Authority, in which infuriates Regis even at the mention of Jenny Sparks. However, Yngvi informs that according to their advisors, they have tracked the Authority's door frequency to the Carrier, in which allowing their soldiers to counterattack on their enemies, enlightening Regis.

In Rendelsham, England, Jenny Sparks and her friends interrogates Lorenzo. It is learned from both Jenny and Lorenzo is that Spark severely wounded Regis in 1925 by castrating him, and that after fifty years of devastation in Sliding Albion Regis have rebuilt his empire and plans to conquer the WildStorm reality of Earth in order to make room for the Blues and to propagate more numbers of the Blue race by turning Earth into a "rape camp".

Meanwhile over northern Europe, multiples of shiftship fleets from Sliding Albion emerges and begins their invasion of Earth. In the Carrier, the four members of the Authority detects the emergence of the shiftships. Suddenly the interior of the Carrier is beset by doorways and allowing a cavalry from Sliding Albion to attack. The Authority fends off the waves of cavalry troops long enough for Apollo to annihilate them, but at the cost of extinguishing his solar energy. Jenny Sparks, the Engineer, and Swift returns to the Carrier and are met by the remaining Sliding Albion cavalry in which the Engineer quickly kills them. The Authority regroups and bears the situation of the second invasion in northern Europe. Jenny plans out by having Apollo to destroy the invasion fleet alone; Jenny assures to the others that despite Apollo's health, he will soon be restore, while she and the others will invade Sliding Albion.

Retrieved from "https://heykidscomics.fandom.com/wiki/The_Authority_Vol_1_7?oldid=1413137"
Community content is available under CC-BY-SA unless otherwise noted.