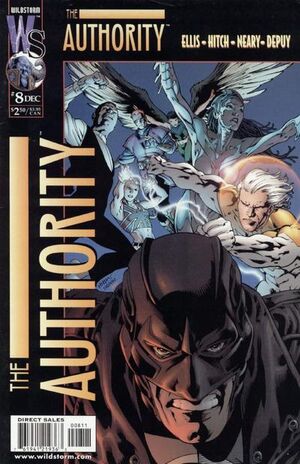 Maybe we just did what we said we would, all along. Changing things for the better. One Earth down, one to go.

Midnighter is reluctant in letting a weaken Apollo to fight, but Apollo assure him that he will be alright. At the bridge, the Engineer have herself linked up with the Carrier and able to convince it to travel to the reality of Sliding Albion. Meanwhile Apollo is sent back to Earth but is unconscious as he free-fall in the sky.

The Carrier eventually arrived directly above Albion's London. Jenny Sparks then use her power to cause a strong lightning strike on Buckingham Palace, destroying the building along with several other shiftships. In the burnt rubble of the Palace, Regis survives the strike. Seeing him on the Carrier's monitor Jenny informs her team on planning their attack on Regis.

In Sliding Albion, Midnighter and Jack Hawksmoor fights Regis with little success. After swatting away Jack, Regis badly pummels Midnighter. Regis then notice Jack's absence and is split mid-waist in half by Jack from underground, killing him. After Regis' death and Apollo's devastation to the shiftship fleet, the Carrier's bridge is repaired by the Engineer and Jenny Sparks directs it to Italy, the other seat power of the Blues. Once over Italy, the Doctor magically conjures the Mediterranean sea to engulf the entire peninsula. In an all-frequencies message, Jenny Sparks broadcast her message to the people of Sliding Albion to take advantage of a second chance from being freed from the Blues and finally sternly telling "We are the Authority. Behave."

As the Carrier travels through The Bleed Jenny informs the reunited team that they have succeeded in "changing" Sliding Albion for the better good and explicitly imply that they will change their world as well.

Retrieved from "https://heykidscomics.fandom.com/wiki/The_Authority_Vol_1_8?oldid=1413138"
Community content is available under CC-BY-SA unless otherwise noted.